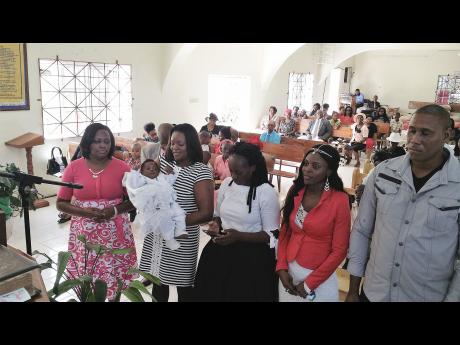 Ornette Myers and Jermaine Garricks will always remember Sunday September 3, 2017. It was the day on which the young parents took their baby boy Jermarcus Garricks to the Sanguinetti New Testament Church of God in Clarendon to be christened.

With aunt Althea Lynch-Cohen holding her nephew and the parents and others standing with them in support, the two parents listened attentively to every word of instruction given by Minister Denise Johnson-Knight, who presided over the sacred ceremony, along with Bishop Donald Dawson, the host pastor.

Johnson-Knight told the parents in the presence of scores of worshippers that they should train up their son in the way he should go so that when he gets old he will not depart from it.

The pastor informed that the family is a divine institution which is ordained and honoured of the Lord since the beginning of time, and that children are a heritage of the Lord, given to parents for their care, protection and training for His glory.

"Every parent needs to recognise this obligation and solemn responsibility to both God and the child in this matter. You need to recognise the sacredness of your charge and with all sincerity accept your responsibility for the nurture and admonition of your son in the way of righteousness and godliness," instructed Johnson-Knight.

The parents pledged to grow Jermarcus in the fear of the Lord, lead him early to Christ as his personal Lord and Saviour and set before him examples of a godly and consistent life.

Dawson prayed for Jermarcus and called on God to allow the anointing of the Holy Ghost to rest upon him, rest upon the house in which he is living, cover him under the blood of Jesus, shield him from every harm and danger and from the hands of Satan.

He called for the presence of God to be upon the lad at all levels of the education system, and called on God to allow him to live as long as He sees it fit.

Little Jermarcus was born at the Mandeville Regional Hospital in Manchester on May 15. He was the fourth baby to be christened at the Sanguinetti New Testament Church since the start of this year.