The Lord provides all his needs 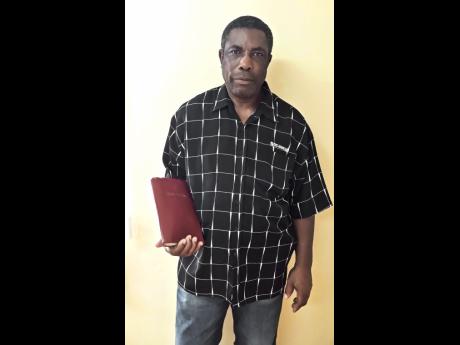 The Lord promised never to leave us nor forsake us, and that He will always work out ways and means for His people.

Well, one Christian who can identify with such words is Hector Allison.

Allison, who is a member of the Equator Faith Mission Church at Blackwoods in Clarendon, and who has been walking with God over the past 21 years, shared his testimony, telling that when he just got saved he never had much.

"I remember going to a convention at our headquarters church in Kingston at 61 Maxfield Avenue. I had a shoe which had a hole in its sole. I was travelling with a pastor at the time to the convention, and rain was falling real heavy, and the vehicle shut off with us," noted Allison.

Allison, who is currently a deacon at his church, shared further that when the vehicle shut off, he asked God what they were going to do.

He said he and all the occupants of the vehicle got out and started pushing it out of the water, which was rising higher every passing moment.

"We got out of the vehicle and pushed it out of the water to get it restarted. When I got back into the vehicle and looked on my shoes, despite it having a hole in its sole, no water entered. It was indeed a miracle as to how the shoes never got soaked. Water even covered the shoes and it still did not enter to wet my feet," he testified.

Allison testified further that two weeks later he went to visit a friend in Mandeville. He said that his friend told him that he was going to give him some shoes for his children.

"I got six pairs of shoes for my sons. When I reached home, two pairs were able to fit me. That was indeed a miracle," said Allison.

Allison said that from that day until now he has never run out of shoes. He added that from that time also, he has been able to get shoes and give to those who are in need.

He wants others to know that we all need to put our trust in God and believe by faith that He is able to see us through difficult situations.