Testimony: God delivered me from sickness 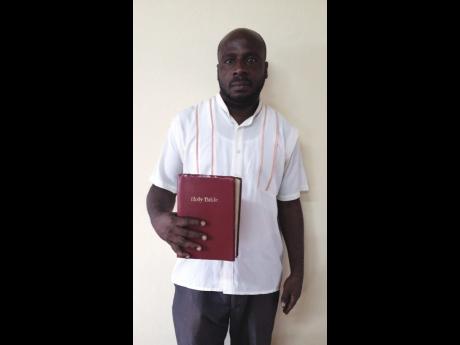 The Blackwoods New Testament Church of God in Clarendon is blessed to have Preston Bailey as one of its hard-working members.

Bailey, who has been saved for over 25 years, currently serves that congregation as an assistant to his pastor.

He is also parish coordinator for the youth ministry in Clarendon, and is also serving as district director for that ministry as well.

Bailey testified that when he was born, he was not like one of those 'normal babies' who cried after being delivered.

"I was born on a Saturday evening, I was told. But like most babies who cried after they are born, I did not. There was no sound from me until the Monday when they were about to burn me. There was word in the community that they were going to burn me," said Bailey.

He said persons believed he was dead and that he should have been burnt.

But he stated that when a shoebox was prepared to place him in, he made a sound, and the plans were aborted.

Having escaped a fiery end, Bailey testified further that while he was growing up, he developed asthma.

"I was really sick. Doctor put limit on my life and those things, but I lived to pass that. The asthma left me and there has not been any trace of it for over 20 years now. I used to take a lot of medication, but thank God, I have not had to continue," testified Bailey.

He explained that he attended a crusade one night and an evangelist called for somebody who was suffering from asthma to come up. He went to the altar and he received prayer.

Bailey said he believed strongly that he would have been healed, because he wanted to get rid of the illness.

He said he also had a praying mother who was also making supplication to God for him to get rid of the illness.

"From that night, I have not had any symptoms of the asthma. I have had no attack and I have never taken medication for it ever since," he said. "Those who are sick with asthma, if you believe and trust God you, too, can be healed."