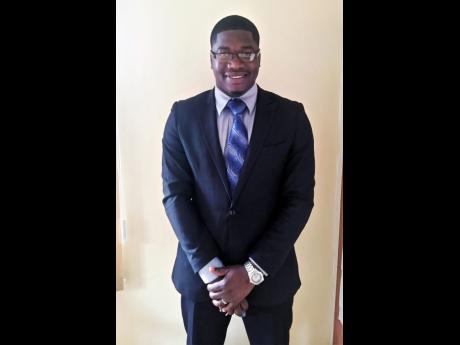 The Reverend Glenville Bulgin is currently the pastor of the Spalding Hill and Spring Ground New Testament Church of God in Manchester.

But his rise in the church did not come about because of his own doing.

Bulgin, who hails from Deeside in Trelawny, has been saved for six years. He testified that he has always wanted to do something positive with his life.

His mother migrated when he was nine. He lived with his father, but the elder Bulgin was not really there for him, leaving him to do everything on his own.

"From I was nine years old, I had to wash and iron my clothes and do all those things, and after I was through with high school, I was successful in my CXC examinations. But I did not have anyone to push me into college or university, so I was out there on the street," said Bulgin.

One day, a voice said, "Try Jesus", but he brushed it off.

One morning, he attended church. He had no intention of starting a Christian journey but found himself at the altar, accepted the Lord, and was baptised that same day.

"In the space of about two weeks, I heard persons in the church calling me 'pastor'. I told God ... that I did not just want to come to church and sit down, but whatever they asked me to do, I was going to do it," testified Bulgin.

He started attending Bible study because he just wanted more and more of God, and within one year after being mentored by his pastor, he applied to the Bethel Bible College of the Caribbean-Jamaica and was accepted to pursue studies in theology.

The young pastor shared that life at Bethel was not easy and that he stepped into college by faith. He noted that when he was accepted, he did not know where the funds were coming from to pay tuition.

"I packed my bag and stepped out with only my bus fare and headed to the Mandeville campus," he said.

While registering at the office, he was asked how much money he had paid towards his tuition. He admitted that he had paid nothing and was told that he could not go through with the registration and that he was going to be sent back home. But he was determined.

"I stayed on the dorm for a week without paying any tuition, but at the end of the week, somebody showed up and paid some money for me," he said. I went back home and attended church the month end and was asked to say a prayer during service. When I was through praying, a sister from overseas came and told me that God said she was to pay a portion of my tuition for me every semester," testified Bulgin.