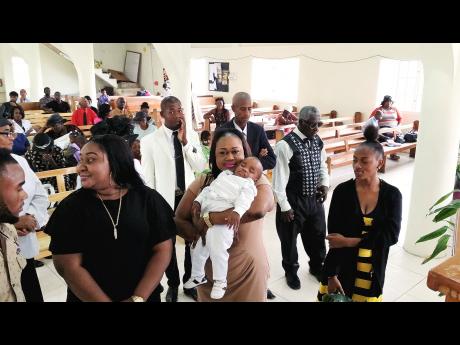 George Henry photo Mother Omeila Davidson (with baby in hand), is supported by go-parents and officers, while standing before the altar.

When Bishop Donald Dawson, pastor at the Sanguinetti New Testament Church of God in Clarendon, recently called on Omeila Davidson to take her baby son, Kym-malo Johnson, to the altar for christening, she did not hesitate.

Supported by the baby's godparents and officers from that church, Davidson stood at the altar while facing the pastor and his assistant, Minister Denise Johnson-Knight. She listened to every instruction given before the baby boy received prayer and God's blessings were pronounced on him.

Johnson-Knight reminded the mother, godparents and officers that they all have an obligation to ensure that the baby boy is faithful to the Lord.

She stressed that they also have an obligation to be examples to the child for the Almighty.

"The parents of this child must recognise the sacredness of their charge and with all sincerity accept your responsibility for the nurture and admonition of this child in the ways of righteousness and godliness," stressed Johnson-Knight.

In his charge to Kym-malo's mother and godparents, Dawson encouraged them to train Kym-malo whether he is sitting down, walking, or lying down.

He said the boy should be trained with the Word of God.

The mother and godparents were also told that it is their duty to provide a Christian home and a godly environment for little Kym-malo and to ensure that he is taught the principles of the holy faith and the nature of the Christian life as soon as he is able to learn.

They were also told that he should be trained to give reverence to the public and private worship of God.

Davidson and her supporters pledged to bring up Kym-malo in the fear and admonition of the Lord, lead him to accept Christ as his saviour and Lord, and set before him examples of a godly and consistent life.

In her prayer for the baby, Johnson-Knight asked God to open up his faculties and help him to think in a godly way. She called on the Lord to allow Kym-malo's parents to be able to provide for him in all areas of his life.

Little Kym-malo, who is also the son of Kevon Johnson, and who was born at the Annotto Bay Hospital in St Mary on September 18, 2017, is the fourth baby to be christened at the Sanguinetti New Testament Church in 2018 so far.

He weighed eight pounds at birth. Two babies were christened at the church in 2017.