Life & Times: Prayer warrior remembered for her devotion to the Lord 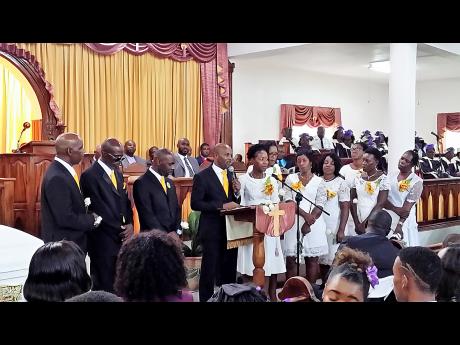 Ruby Knight's children paying tribute to their mother during her thanksgiving service.

The Cobbla New Testament Church of God in Manchester was packed to capacity recently as hundreds turned out to pay their last respects to late veteran churchwoman and prayer warrior Ruby Joyce Knight at her funeral.

There were glowing tributes for a woman who was well-loved, respected, and valued. The late churchwoman's life was wonderfully summed up during her eulogy, done by her dear friend, Jacqueline Gooden.

Gooden described Knight as a spiritual leader in her home, where she raised all of her 12 children to honour God. She stressed that Knight was a stickler for prayer and early-morning devotion was a must at her Cobbla home.

"She was a good cook when it comes to cornmeal dumplings, the good old pork, stew peas, chicken that she never ate, and a wicked hominy porridge. She loved baking, and her mouth-watering puddings, gizzadas and grater cakes have been talked about far and wide," said Gooden.

She shared that Knight, affectionately called 'Siby', was a principled woman who believed that the standards of the Church must be upheld whether one was saved or not. She stressed that the late prayer warrior was unwavering and dauntless in her commitment to the service of the Lord.

"She was a choir member, and for a time, her grandson, Shane, was the unofficial scribe for the choir as she would volunteer him to write the words of the songs for up to 15 persons," noted Gooden.

Gooden impressed upon mourners that for more than 45 years, Sister Ruby gave definition to the title 'prayer mother'. She pointed out that prayer was her ministry and calling as she was always involved in house prayer, hospital prayer, church prayer, bound-and-loose prayer, salvation prayer, deliverance prayer, breakthrough prayer, phone prayer, among others.

"As long as you needed a prayer, Siby could be called upon. Hallelujah! Thank you, Jesus! Glory! A grunt or two and unknown tongues were the usual fare. Hell trembled," said Gooden.

She noted that the deceased showed what it meant to be a dedicated servant of God - a fearless warrior whose boldness was frowned upon by many, even the walls of Christendom. She said that Knight was not afraid to declare "thus saith God!" and God therefore entrusted her with warnings, messages, prophecies and declarations that only a few would carry.

Following the service, Knight's body was interred at the church cemetery.