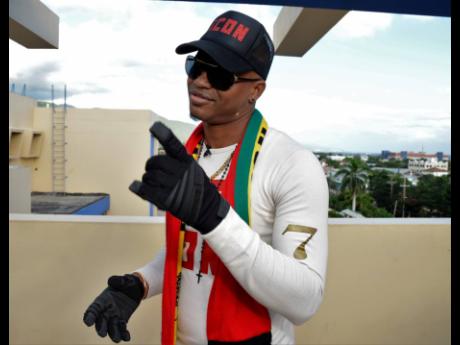 Marlon ‘Icon’ Samuels, the Star of the Month.

World-famous cricketer Marlon Samuels is stretching different muscles these days. In reaction to a contentious social media situation with a popular selector last year, the sportsman released his first song, called ‘Spoon Head’. Following the positive reactions to his music, Samuels decided to energise his musical hobby and turn it into a career, of sorts, using the moniker ‘Icon’.

Unlike many, this new artiste isn’t looking for fortune. Instead, the earnings will feed into the Marlon Samuels Foundation.

The Marlon Samuels Foundation was launched in 2013. It aims to promote the welfare, education and employment of persons who are blind or visually impaired in Jamaica. He established the foundation after he sustained an eye injury while playing for Melbourne Renegades in the Australia Big Bash Twenty20 tournament in 2013. The stylish right-handed batsman was struck by a delivery from Lasith Malinga, which left him without sight temporarily.

In the entertainment business for just a few months, Icon boasts support from some of the top players in the game.

“Some of the biggest names you can find in music, I don’t think all of them are lying. All of them have the same thing to say — that me a trick dem fi years. They can’t believe that I can do music like this. Glen Ricks, Beres Hammond, Half Pint, Leroy Smart — all of them come to the studio and the engineer play my music for them. They have the same thing to tell me. Mi nuh know if suh much people can lie.”

Icon has already landed a feature with Glen Ricks on a track called How Can I Forget.

The athlete, now doubling as an entertainer, also reports support from local deejays.

“I think that if the music have substance in it, the deejays will play it. DJ Sunshine, never met her in my life — she plays the Top Gyallis song every day. Mama Elise (Kelly) plays How Can I Forget, and she play it right to the end. And DJ Liquid playing my music,” he said.

Though his entry to the music industry may seem sudden, Icon has been ‘in the know’ for many years.

Such exposure may have paid off, as the up-and-coming deejay claims to have already recorded 35 songs in just two and a half months.

With plans to build his own studio, Icon also intends to expand his musical contribution by supporting other upcoming local acts.

“We have a lot of artistes that I’ll be giving the strength right through.”

As his new career unfolds, Icon will leave it to the public to decide whether or not he is a skilful lyricist and performer. But he is confident.