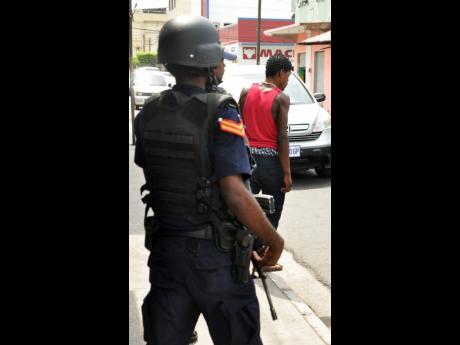 A video in which the Trelawny police are being accused of using profane language to address civilians has been making the rounds on social media with many expressing outrage at the officers' alleged conduct.

The two-minute long amateur footage was filmed in Daniel Town, Trelawny, where residents blocked roads to protest a lack of water in the area after a pump broke.

The shaky footage opens with a female's voice shouting, "Take out unuh phone and video!" This was apparently to capture the alleged misconduct of some officers who were present.

Later, another female voice is heard shouting, "Offica! Offica! You no see the man respect civilian more than you? No bully people man, talk to people with respect. Officer, you a talk to him wid war, a war you a bring to the man?"

But the scene which caused the most outrage on social media was where a man was seen lamenting to a police inspector about the manner in which an officer addressed him.

The man pointed in the direction of a group of police officers saying, "Him a come style me as p..... Mi simply a tell the people dem fi move outta the way and this man a come call me p....!

Someone is then heard off camera saying, "S... yuh mother!"

Shortly after, the person recording the video pointed the camera in a policeman's face and attempted to ask a question, however he grabbed the camera.

After viewing the video Errol Chattoo, head of the Western Jamaica branch of the Independent Commission of Investigations (INDECOM), said what he sees are citizens making allegations that cannot be substantiated by what is seen in the video.

"Were the residents to make a formal report to INDECOM, then naturally we record statements and we probe the matter as long as it falls under our realm," he said.

Superintendent Clive Blair, Divisional Commander of Trelawny, said he has ordered an investigation into the matter, but will make no comments until after the investigation.

And there were varying responses on social media to the controversial footage.

"Him nuh have nuh respect, not even infront the sarge," one person posted.

Another added, "Why everyone just look at one side of the story. From what I am looking at, it doesn't tell me the full story of the matter."