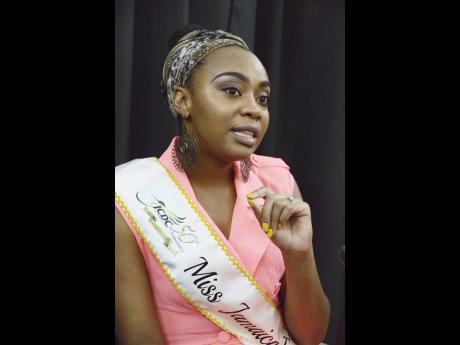 There is not much $5 can do in Jamaica these days, but for that small cost, popular media personality Krystal Tomlinson is offering a forum on self-development to 15 young women.

Tomlinson is hosting a series of public speaking and self-management sessions for young women, which

started on November 11 and will end on December 2.

When THE STAR queried the reason for the small cost, Tomlinson said she wanted to attach a certain level of value to the sessions.

"I wanted to do it free, but I didn't want it to be seen as a volunteer

service. So I decided on $5 so that persons can see it as employing me to deliver a service and hold me to a standard," explained Tomlinson.

The Nyammins host said she wanted to offer her services as a way of developing young women as she had been asked to mentor several persons in the past.

"There are a lot of young women who ask me for advice, and this is my way of interacting with several of them while in an intimate setting," Tomlinson said.

Tomlinson said the intention is to do four sessions with these 15 persons to start the initiative, and then in January, she will host another 15 persons.

"The sessions focus on time management, finding passion in mundane things, relationships, branding yourself, and a multitude of things aimed at development," Tomlinson noted.

The FAME 95 presenter said the reception from the first session was positive and she has been asked to extend the sessions to include men.

"Young men wanted to participate, and that surprised me, but I am seriously thinking about having a mixed group next year for the next session," said Tomlinson.

According to her, the sessions will also provide the participants with networking opportunities.

"It is also a networking platform. This is a great way to create a strong network because you're meeting people with different skills at the forum," she added.