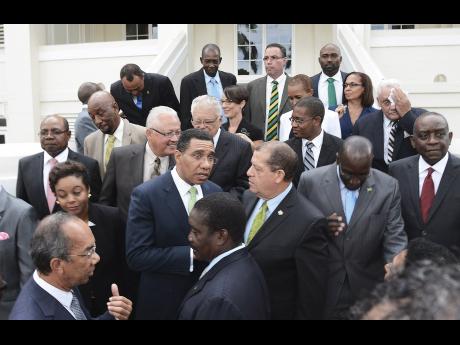 Jamaicans will spend over $155 million on salaries for members of the new Government yearly. This is $40 million cheaper than the cost of maintaining Portia Simpson Miller's team.

In addition to the big bucks, the new ministers will be getting free cars, drivers, houses and maids, all paid for by taxpayers.

Portia Simpson Miller's 28-member executive, which consisted of 20 ministers and eight junior ministers, was costing the country $195 million in salary and allowances per year before the change of Government.

"This is the first signal that we intend to be efficient and frugal in Government. This is a tangible difference that we are not only interested in changing government, but we are committed to changing how government works," Holness said at King's House yesterday.

Prime Minister Andrew Holness will earn a salary of $8.6 million per year when allowances are added, and he will also be provided with a house and car.