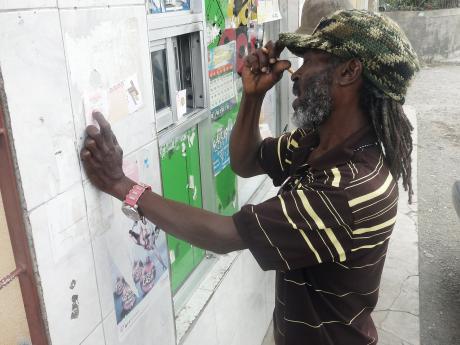 McLean picks his numbers outside the lottery shop. 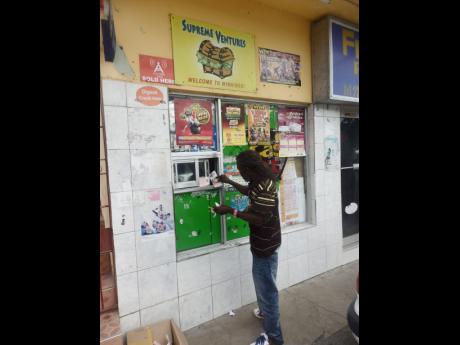 The Woodburn, St Thomas, lottery winner who blew the bulk of his $45 million winnings has been visited by his dead grandmother, and she is far from pleased.

Michael 'Lotto Man' McLean said when he won the jackpot in 2004, it was his late grandmother who revealed the numbers to him in a dream.

She has again visited him, but not with winning numbers. This time, she has come back from the grave to tell McLean that she is very upset with him.

“My grandmother dream me one Sunday night this year to let me know that I must try and do better because she and my (late) grandfather don’t like how me living and that they are upset with me," McLean said.

Still hoping to become two-time lucky, McLean goes to bed hoping the winning numbers would be revealed to him again. He also makes regular visits to gaming outlets, purchasing tickets.

"To tell the truth, it mek mi feel a way," McLean said of the latest dream from his grandmother. "I feel messed up to know that she turned me into a millionaire, and mi form fool and turn back myself in a pauper. When she dream me, I went to buy grandmother in CashPot and I won. I only had $100 at the time and I used it to buy the number and I ended up winning a little over $2,000.  A long time me grandmother a tek care of me."

McLean said he has been heavily criticised since he revealed how he blew up his winnings. "A lot of people have been saying that they didn’t know that I’m broke and that they weren’t expecting me to come down to this," he said.

But McLean said that while he did blew most of the money, he made some wise decisions.

"I hear some people who read the story saying a wukliss mi wukliss, but if I was wukliss everything I had would have gone down the drain. But I’m not worthless; I have a house, a van and furniture to show. Plus, I opened three bank accounts with half a million each for my three children so they also have that to show,” he said. “I tried to help others and hoped that others would have helped me because I don’t have the education, but the help that I hoped for never came through, so, because of that, I lost my winnings.”

The STAR visited McLean yesterday as he made yet another visit to a gaming house in Yallahs, the same place he purchased his winning ticket, hoping his luck would change.

McLean said his grandmother's desire was to see the family in a position to help themselves financially. He reminisced on a time when he and his grandmother used to walk barefooted miles from their home to sell fish in an attempt to cater to the family’s needs.

“She see that I was suffering and helped me out and I let her down, but I hope to change that and make her proud again,” he said.

Down but undefeated, McLean says he will buy the lottery until he dies.

“I’m trying to win the lottery again. I buy it all the time once I have the money to do so. I want to build a plaza so I can employ all the people who are calling me worthless, so they see that I have a good heart. Is $30 give me the $45 million that I won so I can’t tight with money. I won’t stop buying the lotto till I die because lotto can be won. People always say it can’t win but I know for sure that it can," McLean said. "The first time I won I set up my family because I love them, but next time I am going to focus on me,” he said.