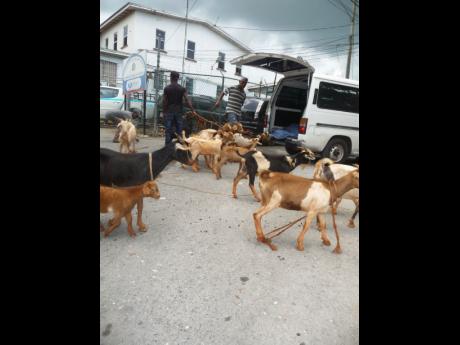 Rasbert Turner Photo The stolen goats were picked up at the Linstead Police Station by their owners. 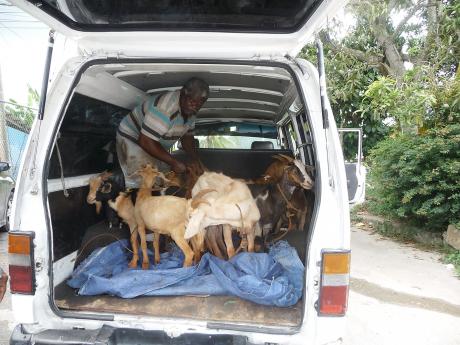 Rasbert Turner Photo After being recovered by their owners, the goats were packed into the back of this vehicle.
1
2

Goat thieves in St Catherine collared a bad dog and then cut its throat in order to silence it, and then stole all 16 animals which were penned up in a backyard.

The goats, said to value about $500,000, were stolen in Linstead between Sunday night and Monday morning.

The three farmers to whom the goats belonged said that some of the animals were daubed with red mud by the crooks in a failed attempt to change their colour.

Despite employing the sleazy tactics, the thieves were unable to benefit from their loot as the goats were recovered by the police in a section of the parish.

"Mi glad dat dem find the goat back," said one of the farmers, who identified himself as Maas Willie.

He told THE STAR that the dog tried to alert him that something was wrong, but the animal was quickly muted.

"Mi remember hearing the dog barking near the pen and then mi hear it stop, and I go back to sleep. Mi wake up and see di dog neck cut and the goat dem gone," Mass Willie said.

Mass Willie had responsibility for tending to the goats, some of which are owned by Ewing Brown and Melvin Erving.

Brown theorised that the thieves led the goats through bushes from Treadways to a section of the Windalco property near Ewarton.

Erving relayed his excitement when he heard that the animals were recovered.

"Praedial larceny is no longer a situation where a man steals a pig or a goat or a cow with a view to feed his own family, it is a matter that people steal to put things to market," Francis said.