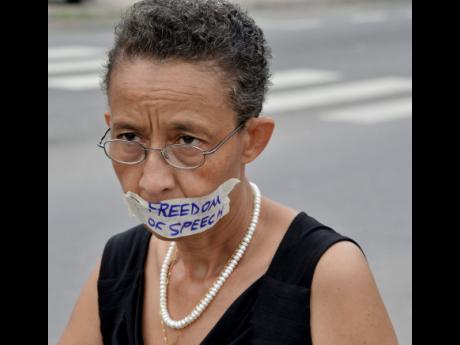 In this 2014 photo, Shirley Richards, stood in front the UWI Mona campus in support of Professor Brendan Bain who was fired from his post at the campus. Bain had given evidence in a Belize court irked gay rights and other lobby groups.

The Jamaica Coalition for a Healthy Society is hosting a forum today to educate Jamaicans about the possible implications of the recently repealed buggery law in Belize.

Advocacy Officer Philippa Davies told THE STAR that all Caribbean islands should be concerned about the ruling and should therefore be properly informed.

"The Jamaican public needs to know why the case was brought up, what the Chief Justice ruled, and what it means for the rest of the Caribbean," she said.

Belize chief justice Kenneth Benjamin has found that a law that criminalises sex between consenting adults of the same sex is unconstitutional.

Shirley Richards, past president of the Lawyers' Christian Fellowship, told THE STAR that the meeting is a very important one.

"We're expecting discussion in a lively, passionate but respectable manner, but not opposition, as we've never had to deal with opposition before. Jamaica needs to be awakened about the issues we are facing as a nation in order to ignite change. We're really looking to educate our listeners," Richards said.

Meanwhile, Davies described the ruling by the chief justice in Belize as flawed and said that the buggery law must remain because it draws a clear line between what is normal and abnormal sexual behaviour.

"Keeping the law in place means that children will not be taught that perverted sexual behaviour is acceptable. It also facilitates keeping marriage under the right definition, and if the buggery law is removed, then the doors for same-sex marriage will be open."

The forum will be held at the St Andrew High School for Girls auditorium starting at 6 p.m. The Jamaica Coalition for Healthy Society was formed in 2012 and consists of Christians who state that they have a vision to holistically enrich Jamaican society.