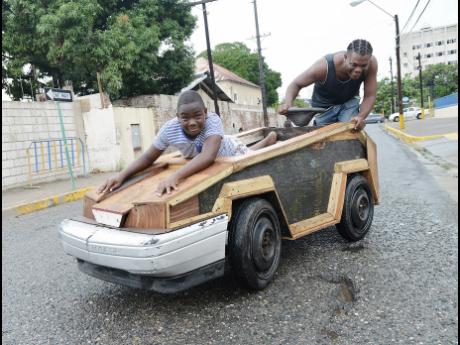 Some 16 years ago, the annual Pushcart Derby was discontinued, much to the disappointment of many Jamaicans who loved the cultural pastime, from which sports such as bobsled were derived.
However, it will be back with a bang this National Heroes Day, under the theme ‘Heroes Showdown’, in honour of Jamaica’s national heroes and other influential countrymen.
Organiser for the event, Evon Williams, told THE WEEKEND STAR that he plans to restore the sport to its former glory.
During its heyday, the Pushcart Derby used to be a highly anticipated summer event, held in St Ann, featuring teams from all 14 parishes steering their creatively crafted carts down a steep slope for the championship title, much to the amusement of onlookers.
To kick off the relaunch of the sport, all pushcarts participating in the event will be based on some influential Jamaican individual.
“I already have seven specific carts that I made based on the national heroes. I also have one named after Usain Bolt, one after Shelly-Ann Fraser-Pryce and one after Bob Marley,” Williams shared, adding that his colleagues have also named carts after Gregory Isaacs and Dennis Brown.
“It’s going to be an exciting thing, you know, because all the people who are going to participate are making big talk about how they are going to win,” Williams shared, adding that the prizes are attractive.
The event will have four classes of races, all of which are named after national heroes, and the winner of each class will vie for the ‘champion of champions’ title. The winner will walk away with $150,000; second place, $100,000; third place, $75,000; and $55,000 for the fourth place. Wisynco, the main sponsor for the event, will also offer branded prizes.
There will also be a veteran’s race for old timers like Williams, who have been a part of the pushcart derby during the earlier days.
So far, 30 carts have been registered, but Williams said the door is still open for those interested in participating in the event, and will remain open until a week before the event. As for the requirements, other than being based on an influential Jamaican figure, “The cart needs to have a driver and a pillion, and the cart has to be made to accommodate both of them,”
The event will be held at its original home at Red Gal Ring, Stony Hill, St Andrew, on Heroes Day, Monday, October 17.
Races start at 10 a.m. and will continue until 5 p.m. Admission is free.