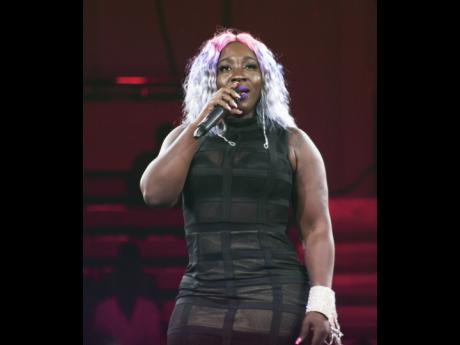 Spice performing during the Rio Sports Gala before exiting the stage prematurely.

The organisers of the Rio Sports Gala and Awards ceremony have denied interrupting the set of dancehall artiste Spice last Saturday night.

The deejay prematurely ended her performance at the National Indoor Sports Centre, and blasted organisers on Sunday hinting that they had cut her set. But Lenford Salmon, the producer of the event, denied this, saying the artiste's DJ is to be blamed.

"We did not cut Spice's performance. The incident that occurred was from her side! We asked all the acts scheduled to perform to come to a technical rehearsal the day before and every performing artiste showed up, except Spice. We even asked them to bring their own disc jocks because we know how technical this issue could get. Spice and her people came when the show had started and her DJ was in a tizzy! He was even saying to our technical operator that he isn't even sure that the CD would work and that was even before Spice went on the stage. He took over the console, played the music, and so said so done!" explained Salmon.

Salmon revealed that during the planning of the event, there was a discussion as to which artiste the athletes would want to see perform and Spice was mentioned. "Spice's name came up as one of the artistes the athletes would have liked to see and we discussed it with Headline Entertainment. But we knew that her dress, lyrics, and dancers may not have been appropriate for the event, and her team assured us that she would dress appropriately and adjust her lyrics, so we would have nothing to worry about. She, however, did not stick to that agreement," he said.

Salmon has shunned speculations of prejudice saying that the organisers have worked with other controversial artistes successfully because they followed instructions. "We have had other controversial acts such as Bounty Killer, Beenie Man, and even Mavado conformed to occasions as family oriented as Grand Gala. All we had to do was speak to their management and every single one of them conformed. We try to integrate these artistes because we don't want persons thinking only negatively of dancehall as it is our culture," he said.

Carlette DeLeon, a representative from Headline Entertainment, confirmed that it was an error on the part of Spice's DJ which caused her performance to be cut. DeLeon also pointed out that it was Spice's technical team which was asked to attend the rehearsal and not the artiste.

Spice walked off stage on Saturday after asking for the rhythm for her song, Indicator, and it was not forthcoming. But after she exited a group entered and began dancing to the very same song.

On Sunday, Spice blasted the show's organisers, via social media, saying there was no technical difficulty. "I'm not bashing these lovely dancers who I love dearly, but they were dressed in short shorts and bra top on stage wining and a skin out. Girls wining on man back it up and all, but I wore a dress and it was inappropriate," she posted on Instagram. "Or is it because I'm not from 'uptown', it wasn't OK for me to sing my own song but they could dance to it? I wonder what they expected me to sing ..." Efforts to speak to Spice yesterday proved futile.

Salmon said the dance group which performed after Spice had brought their own CD and again pointed out that there was no interference during the artiste's set.