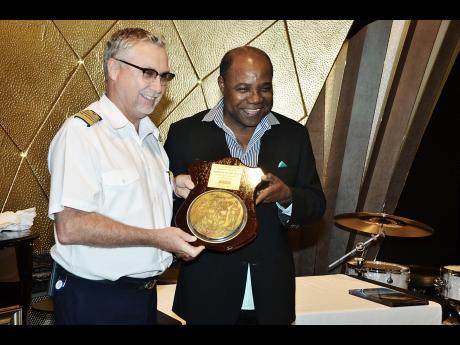 Minister of Tourism, Hon Edmund Bartlett (right), presents a gift to Harmony of the Seas captain, Johnny Faevelen, on board the ship at the Falmouth Pier on Tuesday.

Tourism Minister Edmund Bartlett is urging stakeholders to assist in the fight against visitor harassment, emphasising that the problem can no longer be allowed to persist.

Bartlett, who was in Falmouth, Trelawny, on Tuesday, as part of an official delegation to welcome the world's largest cruise ship, Royal Caribbean's 'Harmony of the Seas', said that the country cannot allow harassment to derail all the gains that have been made in tourism.

"We have the Courtesy Corps in place, and we are trying to enact legislation giving them the power of arrest. We have to give them more teeth where they can be more effective in carrying out their duties (to prevent harassment)," the minister said.

Bartlett said the approach does not necessarily have to be heavy-handed, adding that an effort should also be made to make the harassers know that "there is an alternative to their way of life."

"Tourism is both fragile and sensitive. We have a lot of competition in the marketplace, and have to rely heavily on destination assurance. As I have always maintained, we cannot allow a few bad apples to destroy what we have worked so hard to build," he said.

The minister noted that sometimes what is considered or deemed as harassment is simply "an overbearing or an overly aggressive" approach that some visitors find annoying.

"We have to be cognisant that not everyone wants to be followed around, or wants to be touched," Bartlett said.

He said that the approach he favours most is a holistic one, where opportunities and avenues are created where people are made to feel as if they are an important part of the sector.

Some 8,000 guests and crew members arrived on the 'Harmony of the Seas' when it docked in Falmouth.