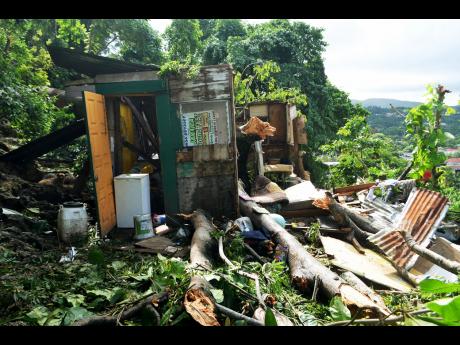 A huge tree fell on the family house in an area known as Capture Land in Buckfield, Ocho Rios, early yesterday morning, killing Shawn Shaw, and his daughter Sherina. 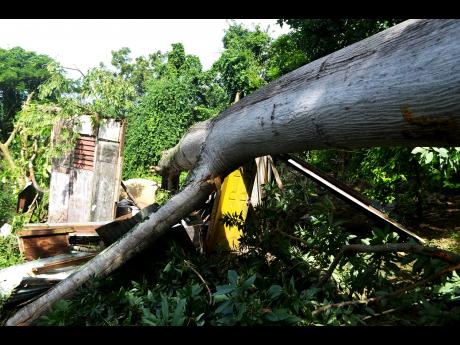 This huge tree fell on the house of Shawn Shaw, killing him and his daughter. 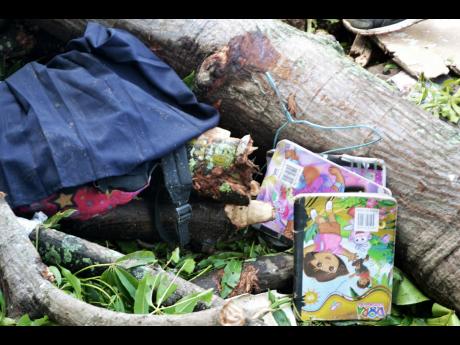 The condition of these books show the tragedy that struck in Buckfield yesterday morning.
1
2
3

An entire community is now in mourning after a man and his daughter were crushed to death when a tree fell on their house in an area known as Capture Land in Buckfield, Ocho Rios, early yesterday morning.

The man's 11-year-old son, Shawn Jr, who was also in the house at the time of the incident, has been admitted to the St Ann's Bay Hospital with non-life threatening injuries, according to the police.

Shaw was once a popular newspaper vendor in Ocho Rios, before he turned to selling sky juice.

Reports are that sometime after 2 o'clock Monday morning, a cotton tree located in the yard fell during heavy showers, crushing the one-room dwelling in which the family of three lived.

The wooden structure was torn to shreds by the impact, almost killing the two immediately.

The lone survivor was trapped inside the dwelling, and was rescued by neighbours who had come to assist the family.

Police and fire personnel later arrived and removed Shawn Sr and his daughter from the house. Both were later pronounced dead.

One neighbour, Vera Stewart, said she was inside her home when she heard a ?heavy sound?, which she thought, at first, was a utility pole falling.

"When me and she (a neighbour) rush inna di house, a di likkle bwoy mi see. Him two hand and one a him foot. We try fi get him out, but we couldn't. So other people come and tek him out. I never see the father, only one a di daughter hand I could see. Everything trap underneath,? Stewart said.

Stewart said the tree fell because it was weakened because of the burning of its trunk and roots.

"The tree root burn out. The middle burn out. It only have the two side " one side dry and one side have a little green. That's why it tear dung," she said.

However, she couldn't say who did the burning.

Another neighbour, who gave her name as Michelle, said she is counting her blessing because the tree only damaged a section of her bathroom on its way down, sparing her and her two daughters six and eight years old.

She said Shaw had been living at the location for around six years. She said the children's mother left the home some years ago, and Shaw was raising his children by himself.

"The man has been here with his two kids. Now and again him do a little hustling. Him use to sell Gleaner. Him used to sell sky juice, any little hustling," she said.