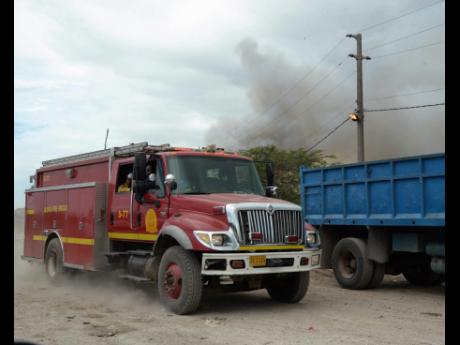 In this 2014 file photo, a fire truck leaves the Riverton City Landfill after trying to put out a fire.

Thick black smoke blanketed the sky because of a large inferno at a scrap- metal dump along Spanish Town Road at the entrance to Riverton City, which blazed furiously late last night.

The fire reportedly left several persons homeless. There were no reports of loss of life or injury.

When THE STAR arrived at the scene about 10 p.m., the blaze appeared too much for the two fire units that were on hand.

Police officers were also at the scene evacuating residents, many of whom were reluctant to move from the property even with the threat of the fire spreading.

A woman, who clutched her baby, said, "Mi nah go no weh. See my house there so. Mi haffi watch mi tings. You know how much people homeless now. Nobody nuh know what cause the fire."

She told THE STAR that her neighbour had lost almost everything.

THE STAR understands that the site that caught fire has been a storage location for scrap metal although the business ceased operation when the once lucrative industry was put on hold.