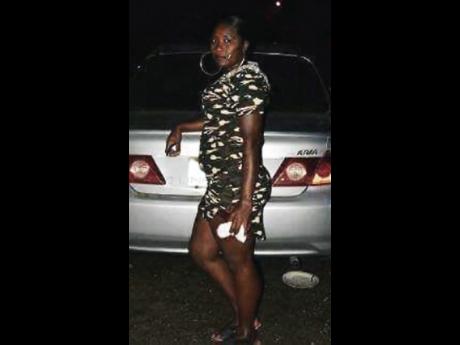 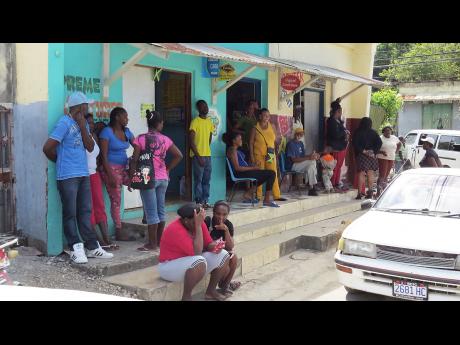 A crowd gather at bar where Kerron Peckoo worked. The mother of seven was attacked and murdered in St Thomas on Tuesday.
1
2

Seven children, the youngest of which turns four today, are forced to live the rest of their lives without their mother, who was on Tuesday brutally murdered just steps away from their home in Hampton Court, St Thomas.

According to reports, thirty-six year old Kerron Peckoo had just locked up the bar where she worked and was walking home about 11 o’clock Tuesday night when she was attacked by a man who allegedly slashed her throat, stabbing her in the face and upper body.

Nimoy Bailey, Peckoo’s oldest child, who is a fifth form student of the Happy Grove High School in Portland, told THE STAR that she witnessed the brutal ordeal.

“I was inside reading and I heard singing. I picked up mommy’s voice so I got up to open the door. By the time I reach the door I hear she bawling out for murder. I panicked and when I opened the door I saw a man over her doing something. I don’t know if is stab or chop but he was on top of her. I rushed back in the house for a machete and when I came out I saw her on the ground a bleed,” she explained as she fought back tears.

Bailey said she rushed inside for a towel and wrapped her mother in it as she shouted for help.

“She said ‘just know mi love unuh. Tell your father to take care of the baby for me.’ I began panicking again and kept telling her to hold on, just hold on,” Nimoy said, adding that her mother named her attacker before she died.

By this time the distraught teen was overcome by the hurt as she began crying.

“After mi hear the shouting mi run up there and grab her up and we put her in the van but by the time we reach Leith Hall (which is situated less than 10km form hospital) she start beat the van and her body start flick up. Then she she: ‘Mi naw go make it. Mi ago dead.’ Then her eye just start roll over,” Brown said.

The woman was taken to the Princess Margaret Hospital where she was pronounced dead.

The St Thomas police have since accosted the father of Peckoo’s youngest child who they say is to be questioned and charged in connection to the murder.

Peckoo, known as Coolie, is remembered as a jovial woman who puts her children first.

Zodie Thomas and Claudette Clarke, teachers of Golden Grove Primary and Infant School, told THE STAR that two of Peckoo’s children are to sit G-Sat exams in a few months.

“She was very involved in her children’s school life and although they couldn’t make it to school everyday because of financial problems, she tried her best with them and kept in touch with us.
She even wanted to better herself as she was a part of the Jamaica For Lifelong Learning Program that we offer in the evenings. She just wanted to be the best for her children,” they said.