Priest killed at his Mandeville mansion 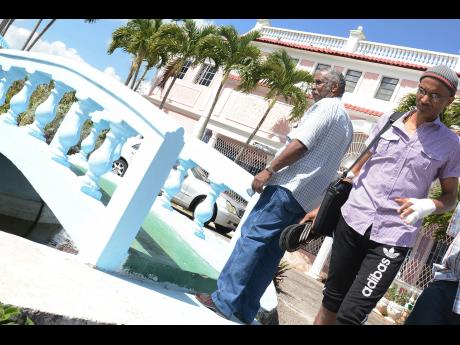 This man suffred a cut to his arm which was apparently inflicted by the person who invaded the home Nathan Pandit and chopped him to death in Monticello Park in Manchester on Wednesday night.

An elderly Hindu priest succumbed to his injuries at the Mandeville Regional Hospital yesterday after he was brutally chopped by unknown assailants at his home in Montecello Park in Mandeville, Manchester, late Wednesday night.

He is identified as 70-year-old Nathan Pandit, who was believed to be the only Hindu priest in Jamaica.

Pandit, who was a contractor before he retired, was living at his house with a gardener, and a man he hired from Canada to manage his property.

Reports are that Pandit received several chops to the head and other parts of his upper body. The man who arrived in Jamaica five days ago from Canada to manage Pandit's property also received chops to his lower arm.

Howard Gregory, a civil engineer, who had worked for Pandit several times before and went to school with him, told THE WEEKEND STAR that he is saddened by the incident.

"I am really saddened. One of the thing about him is him just trust people and even some of the guys that him have here working, I don't think him know them for any long time," Gregory said.

His cousin Rosie Haughton is Pandit's only relative in Jamaica.

"Words can't explain how I feel. He was a very kind person. I just can't believe this happened." The Mandeville police are still carrying out investigations.