May Pen vendors upset with police 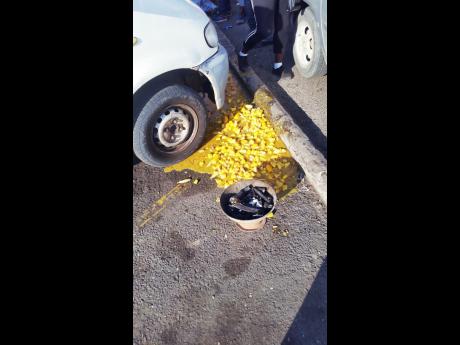 The contents of the pot of the soup that was spilled allegedly after police tried to seize it from a vendor.

President of the May Pen Vendors' Association Lorraine Green Mason is describing the current situation that exists in May Pen between vendors and the police as a volcano waiting to happen.

She said the vendors are constantly being harassed by both the police and the municipal officers for reportedly vending in what they say are unauthorised areas.

In recent times, there have been several altercations between vendors and police with the most recent being Saturday afternoon.

Phyllis Campbell, a soup vendor who has been selling in May Pen for over 10 years, was brought to tears when a pot of soup she had was spilt allegedly during an altercation with police personnel.

Alleged eyewitnesses said the police were conducting an operation along main street with municipal officers and attempted to seize the pot. This caused the contents to spill.

Green Mason says she is disturbed by the situation between the vendors and the police.

"Persons out here are just trying to make an honest bread but the police are behaving as if the law stops with them," she said.

She said the association is planning to boycott a stakeholders meeting planned for tomorrow with the mayor and police.