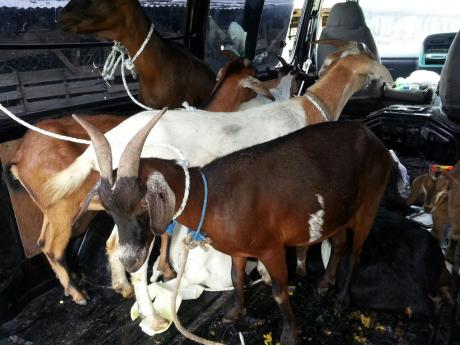 These goats were stolen from their owner in Clarendon.

At least one cattle farmer in Clarendon is expressing concern that the growing problem of praedial larceny may permanently cripple cattle rearing in the parish.

Lloyd Benjamin, general manager of Multipet, operators of a sheep and goat farm in Rhymesbury in the parish, says if the police don't put a dent in the illegal practice, farmers will be unable to supply the local demand, and the country may become dependent on imports to supply sheep and goat meat.

"It is killing the farm in Rhymesbury because it makes no sense to invest in the animals, vet services, staff, and at the end of the day, we still can't get any returns," he said, adding that the farm was started in 2010 by the then government to reduce the importation of goat meat.

Benjamin's comments come less than a day after police conducted a raid in the area between Tuesday night and Wednesday morning, which ended with four persons being arrested, including an employee from the farm, who is believed to be the main culprit.

Those arrested were found with stolen goats belonging to Multipet. Eight heads of goats stolen over a period of two years found on the farm were also recovered on Wednesday.

"Up to two weeks ago, 24 heads of goats were stolen from the farm, but we will continue to work with the police to put a stop to this practice. Otherwise, cattle rearing will be like putting good money into a bad investment," he said.

Meanwhile, Superintendent David White has revealed that the four persons arrested will be interviewed and charged soon. He said the police are also searching for a female who escaped the police dragnet during the raid.

"Last week, we recovered eight stolen cows in Moores, and the police will continue to work to stop this practice. We have been visiting farms and abattoirs and have also been engaging farmers in public education as a means of helping them to secure their livelihood," White said.