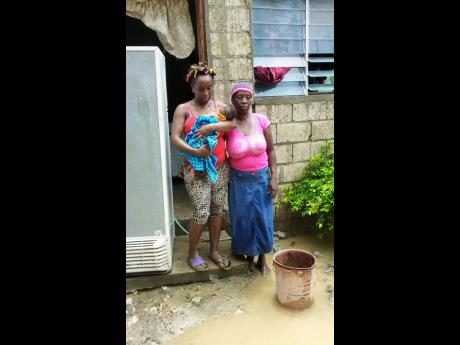 Sherdene Ferguson holds her baby while her mother looks on.

Rohan Foster got a telephone call in the dead of night which caused him to jump from his sleep.

Foster, who lives along the Yallahs main road in St Thomas, was able to save his tenant and her three-month-old child after flood waters invaded their home.

“I was sleeping when I heard my phone ringing. When I look it was my sister who was calling. She asked me if I’m alright and I said, yes. Then she tell me that over my side don’t look so good,” Foster said.

His sister, who lives on the opposite side of the Spring River, told him that it had overflown its banks, and heavy muddy water was making its way through his back door.

“When me step off a the bed a pure water me step inna. Mi rush to the door guh knock up a lady that lives in the house also, and then I began packing my furniture on top of each other,” he said.

Sherdene Ferguson, who occupies a side of Foster’s house, recalled hearing her landlord telling her 'We inna trouble, enuh!’