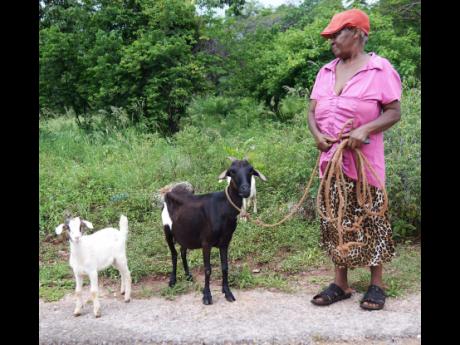 Gloria Daley looks at her goats that survived the recent heavy rains that swept through Warminster in south east St Elizabeth last week. 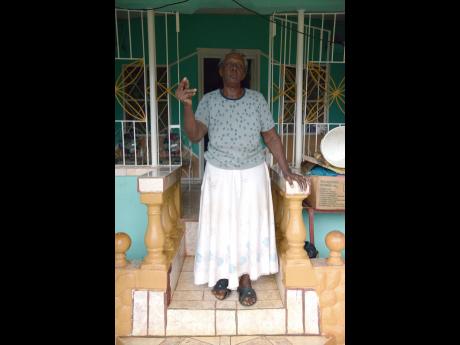 Ivy Palmer is also giving thanks as flood waters washed through her entire house.
1
2

A 58-year-old widow said she is still singing praises to God for the miracle he performed last Monday in Warminster, St Elizabeth, in which he helped her to save her animals during a flash flood.

Gloria Daley said she was inside her house in the afternoon when a heavy downpour brought flood waters over three feet high crashing through her yard.

At that time, her goat, Blessing, and its two kids were tied in the yard, along with her two pigs, called Five Pound and Two Pound.

"I pull the curtain. I couldn't see my yard because it covered in water, and I begin to holler to Jesus fi save us because I couldn't go down there to save them no time," Daley recalled.

She added: "I hear a voice tell me to stretch my hand toward the water, and when I stretch my hand, I see that the pig them get away and seek higher ground around the back. And when I look, I couldn't see the goat dem. When everything was over, I went there and called the goat. I said Blessing, and she respond."

"Blessing take him two foot and lap around the two kids. She was in the middle and the kids by her side with her foot around them and nothing don't do them. So I know God saved them. God is good," Daley told THE STAR.

She further explained that some of her neighbours were not as lucky, as they lost 75 chickens and three goats.

THE STAR also spoke with another resident, 66-year-old Ivy Palmer, who said she is also giving God thanks for sparing her life, as the flood waters swept through her house, uprooted some tiles, and soaked some furniture.

"It wash out me house. Mi have to go in the bed and stand up, it come in high up. Me have a bad foot so I couldn't do anything. Mi say Lord have mercy when me see the water start rise up," Palmer said.

The Warminster residents theorise that blocked drains in a neighbouring community called Folly have caused excess water to be channelled into their community.

They are worried that another downpour would jeopardise life and property.