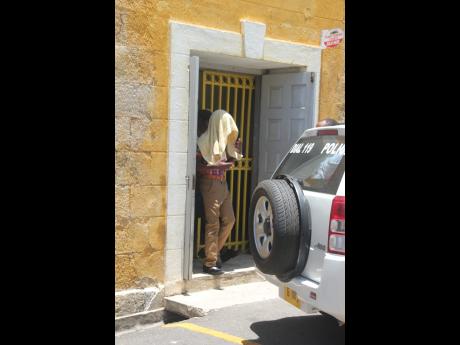 Pastor Presley Smith leaving the the Trelawy Parish Court in May.

One female church member today said that the relatives of the student, who was allegedly buggered by Trelawny pastor, should seek to withdraw the court case against him.

"They should just leave the case and let it go ... If it goes forward it would damage the image of the child," the woman said.

Presley Smith, the 27 year old pastor of The New Testament Church of God in Bunkers Hill, Trelawny, is charged with the offences of grievous sexual assault, buggery and gross indecency arising out of his alleged interactions with the 15 year old boy.

The case mentioned in Trelawny Parish Court today. As was the case when the first appeared in May, members of his congregation were present to offer their support.  Dressed in long sleeve red shirt and a pair of khaki pants, Smith chatted and laughed with his congregants, who offered prayers for him.