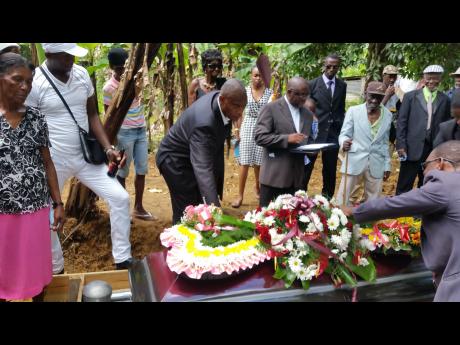 David 'Bungo' Hayden touches the casket in a goodbye gesture as Bush Tiger's remains are lowered into the grave. 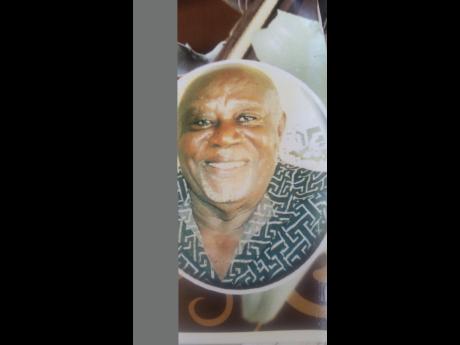 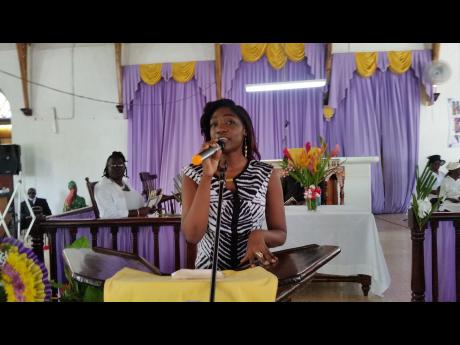 Kacia Whilby delivers a tribute at the funeral.
1
2
3

The thanksgiving service for the late Ashley Reginald Hayden was held at the Hastings Baptist Church in Deeside Trelawny, on Saturday.

Hayden, who was affectionatly called 'Bush Tiger' or 'Tiger', died on July 2. He was 81.

The Reverend Owen Watson, in paying tribute to Bush Tiger, described him as a father figure who loved the people of Deeside.

"Young boys from the district would hop on to his truck as he drove to his farm. They knew that there was going to be crayfish and corned pork soup with unfertilized yellow yam. All the boys from my era looked forward to the strong soup cooked by Tiger," Watson said.

Tiger was involved in several organisations, among them the Jamaica District Lodge. He was a member for more than 40 years and rose to the position of high priest.

Bush Tiger's eulogy was delivered by his son David, and daughter-in-law Norma.

"He was a loving husband to his wife, Hyacinth; a devoted father to his children; a friend and domino partner to his friends; a swimming teacher, especially to women. He was a sports lover and had appropriate adjectives to describe the fortunes of West Indies cricket," the eulogy read.

Norma, who did most of the reading, told of the love he had for his wife, whom he affectionately called 'Cinth'.

"On that fateful day, December 31, 2015, Tiger returned from a shopping expedition and saw his wife lying on the kitchen step in a pool of blood. The man, who couldn't walk without the help of a cane, had his hand forgetting the cane as he ran to his wife, who, it turned out, had her throat slashed by two teenagers who have since been arrested, but are still to have their day in court. Tiger had many friends, among them Mr Wray and his Nephew." Norma recalled.

Bush Tiger was laid to rest in the family plot beside his wife, Hyacinth.