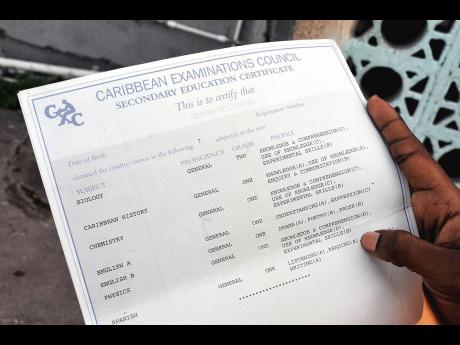 Many students across the Caribbean are now experiencing a range of emotions, from immeasurable joy to utter disappointment, following the recently released Caribbean Examinations Council (CXC) results.

However, one fifth former at a prominent high school in the Corporate Area said that he has been left in shock and awe after he posted his brilliant Caribbean Secondary Examination Certificate (CSEC) results, which comprises of seven distinctions and one credit, only to have the picture stolen by another youngster, who began taking credit for the grades.

"I realised that he was getting a bit of cheap fame because of it. I felt a bit angered and livid because it's my grades that I worked extremely hard for and then someone else is getting the congratulations for it," the 17-year-old told THE STAR.

The disgruntled youngster, who spoke with THE STAR yesterday, asked that neither he nor his school be named because he does not want to exacerbate the negative attention that has arisen from the situation which has gone viral on social media.

He, however, showed THE STAR copies of his results from the CXC portal bearing his name, date of birth and school, and his grades, proving himself to be the rightful owner.

The youngster said it all began when he posted his spectacular results to his Instagram account, and it quickly racked up thousands of likes, with many persons from all over the Caribbean telling him congratulations.

However, not long after, someone drew his attention to another young man who took the same picture of the results and started owning it, and racking up similar amounts of likes and congratulations.

"When I first saw it, I decided to just ignore it because it's my results. He cannot do anything with it other than gain those likes, and then I realised that the whole situation started where people were posting up my pictures and saying, 'This is the actual persons who got the results', and people were calling my name and my school and the entire situation blew up then," the teen told our news team.

"It's not surprising that the results are stolen because he looks like he has never read a book in his lifetime, probably just sits around getting high instead of educated," one user commented.

Meanwhile, the rightful owner told THE STAR that he has a message for the youngster who is claiming to own the results.

"If you want the help, I will offer you the help and you can get those results yourself. Don't post someone else's results. It doesn't make any sense, and you are just making a fool of yourself at the end of the day," he said.