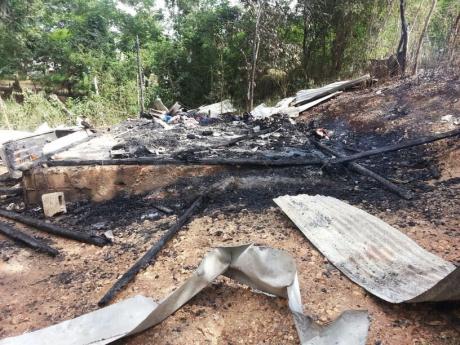 One of the two houses that was burnt to the ground in Havanna Heights, Clarendon on Thursday.

Naomi Morgan and Tamar Bennett, cousins, are now homeless as their houses were burnt 15 minutes apart in Havana Heights, Clarendon.

Deputy Superintendent Patrick Callum, acting division head for the Clarendon Fire Department, told THE STAR that his team has responded to several fires in the area and suspects that they may be a result of arson.

"There was one on the 6th (Wednesday), which is a suspected arson, and I got information that there was one again yesterday (Thursday). The fire unit went there. We don't really know what started the fire because I am getting a lot of information that there is a lot of fire in that area, so we were investigating if there is some violence or something there," Callum said.

According to Deputy Superintendent Callum, information forthcoming from residents is limited.

"We only find the persons who have been affected. They might come here two days after and say they need a report to get something form poor relief. We don't really have regular fires. Maybe you have a one fire, but when you have at least three fires so near, it is something to look at. When you got to the scene, nobody wants to give much information," the senior firefighter said.

Bennett, one of the most recent fire victims, said that when he was at the scene of where Morgan's house once stood, someone approached him and accused him of burning down someone else's house.

He said that by the time he could respond to the accusation, he was alerted to the fact that his house was also on fire.

His cousin, Morgan, was equally overcome with grief and despair as she said that she lost everything.

She was at work when she got the call minutes after midday on Thursday that her house was burnt to the ground.

"I have four kids and a last month one of them father die. Three a dem nuh have nuh fada. A me alone wid dem," she said, in between tears.

"It hard pon me bad, and me woulda waan some help. Dem uniform bun up, textbook, everything deh a yaad bun up," the fire victim said.

Morgan told THE STAR that a man had threatened her in July that he was going to burn down her house. She said that a report was made to the police.

"Mi never know sey a suh human being wicked," Morgan said, adding that she lost three beds and a refrigerator as well as valuables.