Poor family gives back after getting help 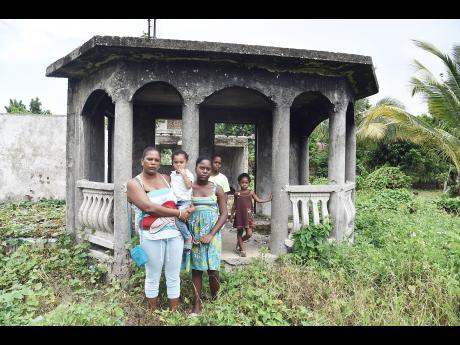 Sherone Rankine Scarlett and her four children in front of their burnt out home on Meyler's Avenue in Savanna-la-Mar, Westmoreland.

After fire destroyed her house, and her husband left her with four children, a struggling Sherone Rankine Scarlett was left destitute, causing her to lose faith in humanity.

But that faith was restored in a remarkable way recently when strangers pooled together to help send her children back to school.

She said the outpouring of support was so tremendous that she was moved to give back to others who she knew were also in need.

"Me neva know say good people still deh inna the world. I get back-to-school supplies so 'til me coulda give me friend them some. I helped the shopkeeper that I always 'trust' from and I help out one of my friends. I was able to give away a total of five school bags," an elated Scarlett told THE STAR.

'The children are so thankful and happy. Even me little son Alex said: 'Mommy, you see when me get rich, a so me a go give back to people'," Scarlett added.

Last Monday, all four children were able to attend school with the help of strangers who called to render assistance to the family.

THE STAR first highlighted the Savanna-la-Mar, Westmoreland, family's story on August 23, when Scarlett, 35, explained that she lost everything in a house fire in 2014, and is yet to get back on her feet.

She said things got worse when her husband, who was the sole breadwinner, left them, and she was left to 'kotch' with relatives, and at times, on the cold floors of someone in the community.

She explained that with little to no support from her husband, and with limited education, she has been trying her best to clothe, feed and school her children by doing odd jobs. But ends were hardly meeting.

After her appeal to the public for assistance, she said she received an outpouring of support from the most unexpected places.

"No big agency neva help me. It was some individuals, mostly ladies. They helped with bags, shoes, writing books, and if I didn't have the uniforms, they would have helped with that too. God is good. I am more than grateful. I want to say one million 'Thank yous' to those people and to THE STAR as well," Scarlett beamed.

She explained that she would greatly appreciate further assistance with the children's text books, and said her aim now is to rebuild a home.

"If it's even some sand and block," Scarlett pleaded, explaining that she is still in dire need to put a roof over her family's head.