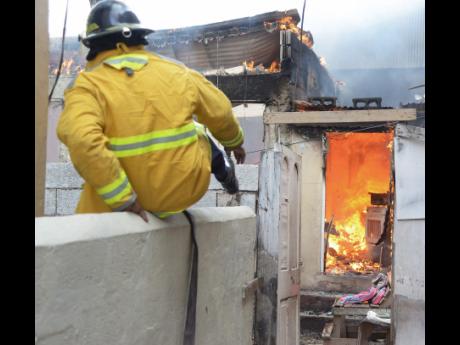 A fireman in action

Classes at the Yallahs High School in St Thomas were yesterday forced to end early after several students were rushed to the nearby community health centre and later transferred to the Princess Margaret Hospital after suffering from smoke inhalation caused by fumes from a nearby fire.

Speaking with THE WEEKEND STAR, the school's principal, Mark Malabver, explained that the smoke was from a fire that broke out near the school compound in the early afternoon.

"It was a bush fire on the adjoining property which made its way on the school wall which also had some bush on it. The fire spread rapidly, threatening one of our buildings which houses a few classrooms. There was a lot of smoke and several of our students suffered from it," he said.

Malabver said members of staff and two past students who were on the compound at the time rushed into action, fighting the fire with extinguishers and water.

They were later joined by a unit from the Yallahs Fire Department who carried out cooling-down exercises.

Although the students were evacuated from the classrooms, some of them were still affected.

The principal noted that approximately eight students were initially affected but that later reports confirmed that 10 children were taken to the hospital.

Two teachers and a few other students were mildly affected by the fumes, while several others were traumatised by the incident.