Fighting for peace in Denham Town 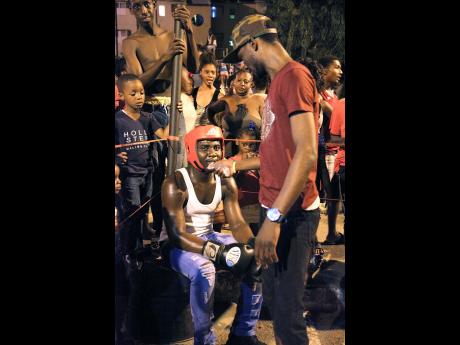 Damion 'Chin' Samuels (left) is given some water by referee Sean Webb during a break of the boxing match. 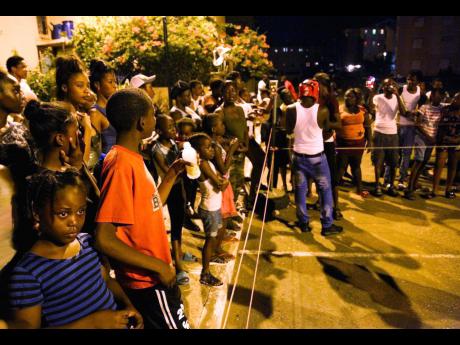 Adults and children alike crowd the makeshift ring to await the boxing matches to begin at Golden Heights. 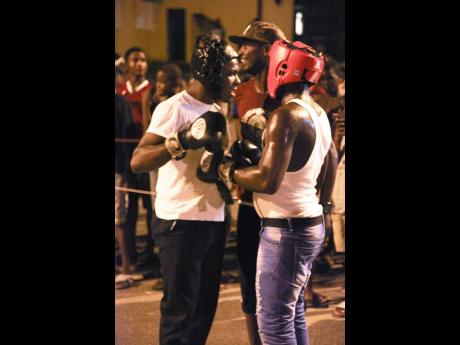 Stephen Burford (left) and Damion 'Chin' Samuels during round one of boxing match in Golden Heights, Denham Town.
1
2
3

There is no need for alarm if a crowd is seen gathered inside the general parking area at the entrance of the Golden Heights Housing Scheme in west Kingston on a Friday night.

The inner-city community, located at Racecourse Lane in Denham Town, has started a boxing initiative with the objective of driving community, development and maintaining the ongoing peace initiative.

"The event is supported by everybody in the community including persons that live in the neighbouring Tivoli Gardens and Hannah Town and so far, it seems like its catching on to other areas in west Kingston," said Richard Miller, coordinator of the boxing event.

In addition to being a peace-building initiative, the event has been a source of economic activity for vendors who sell snacks and beverages throughout the night.

"Any money that is earned will be beneficial to the community. There are so many things we want to do, such as beautification projects or to assist the youth living here," said Miller.

"A few persons will come and bet on the competitors just for the fun of it, even a likkle $100. The fighter can also get money from the bets," he continued.

Miller has teamed up with street dancer Aldean 'Bone Crusher' Kelly, his sister Kelisha and other members of the community to plan, promote and execute the event.

The makeshift ring is made with ropes and reinforced by posts cemented into tires and drums. Protective gear is also provided for competitors, but there is still the need for more.

Because of fears expressed by residents concerned about leaving Golden Heights, the promoters have opted to keep the weekly event where it is. Each fight is unplanned and there are two referees within the ring for each match. If anyone is suspected to have an hidden agenda to challenge someone, referees use their judgement to avoid any matches, or to stop the amateurs fighters within the first round.

Although the combat sport has been thought to promote violence, the residents of Golden Heights think otherwise. Tameka Peynado, a resident, said "it is a great idea as an event that is aimed at community building.

"Remember, persons not fighting to hurt one another. It is just entertainment," she said.