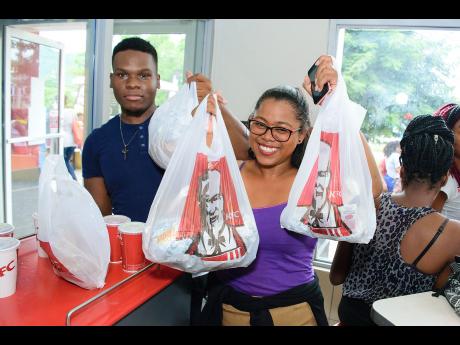 Students take advantage of the free Zinger offer being made available at KFC UWI. 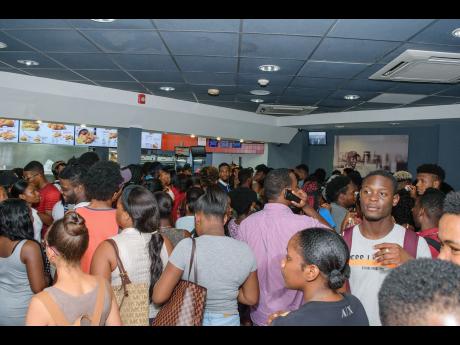 Zinger lovers fill KFC UWI to take advantage of the buy one Zinger combo, get one Zinger sandwich free offer. This special was done to celebrate KFC UWI as the Zinger Capital of Jamaica.
1
2

KFC Jamaica has crowned its UWI Mona location the 'Zinger Capital of Jamaica' based on the passionate and fanatical support that the Zinger sandwich has garnered among the university population in recent years.

KFC Jamaica indicated that sales for the Zinger at its UWI location are consistently at the very top of its restaurant network. This is, in part, due to the consumer palate trends in young adults globally leaning towards sandwiches and convenience choices, as well as the overall satisfaction and value that customers attest to getting from the Zinger.

This promotion comes after a recent petition on change.org titled 'Bring Zingers back to under JMD$600'. The petition was started on October 4. Persons were outraged that the Zinger price had been increased from $595 to $625.

"To celebrate KFC UWI and the students, faculty, and community that support this restaurant and so heavily consume our beloved Zinger sandwich, we're bringing something exciting to them," explained Andrei Roper, KFC Jamaica brand manager.

In addition, he said persons who purchase a Zinger meal at that location can place their name and contact on the back of their receipts and drop them in a box at KFC UWI for a chance to win free Zingers for a year.

And, it gets even better because KFC will also be hosting a social media competition for Zinger lovers at UWI Mona. The winner of that contest will receive a $400,000 tuition grant courtesy of KFC Jamaica.