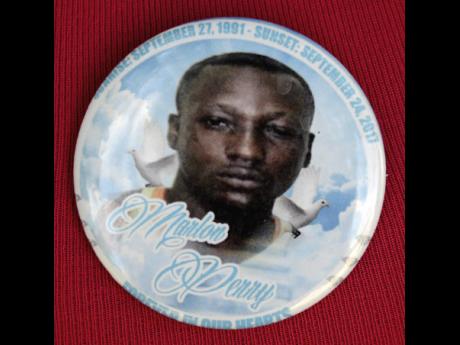 Unlike other notorious gangsters, there will be no splendour at the funeral of Marlon ‘Duppy Film’ Perry on Sunday November 12.

The family admitted that they were struggling to finance the funeral when THE STAR visited their home in Yallahs, St Thomas yesterday.

“Mi would want to send him off in chariot and with the family all in limousine. But we can't afford it,” said Duppy Film’s aunt, Madge-Marie Perry, who has assumed the role of the spokesperson for the family.

Though they have struggled to come up with the money, they said that all is set for the funeral and the grave digging four days earlier.

As they make the final arrangements, they also reflected on what turned their beloved son into the monster who haunted Jamaica for more than two years.

Perry said the speech impediment her nephew had as boy made him an outcast in the community which eventually lead to him becoming a criminal.

“He was just one of those kids who always getting picked on. Him did stamma (stutter), (he was) small and couldn’t fight so they used to beat him up a lot,” she recounted. “I remember one time him gamble and win and them beat him up and take him money.”

She said her nephew promised that "when him grow big him ago kill them.” While there is no certainty that Duppy Film got even with those who mocked and teased him as boy, he certainly became the killer he promised to become.

He became public enemy number one when it is alleged that he murdered corporal Kenneth Davis and constable Craig Palmer in Yallahs, St Thomas in December 2015.

And, his notoriety cost his family their peace of mind as they would be randomly accosted by the police.

“We sorry say him dead. Mi feel it because a family already but the pressure from the police them come off a wi,” Perry said. “Mi all sleep a Morant Bay jail because of it. Dem come with the big prison truck and just throw everybody in it. Dem just come in and pack we up leaving all the kids on my mother who is bed ridden.”

She said the treatment has left her trembling every time she hears the sound of a police vehicle.

Angel of Mercy Funeral Home in Morant Bay is responsible to carry out the funeral.