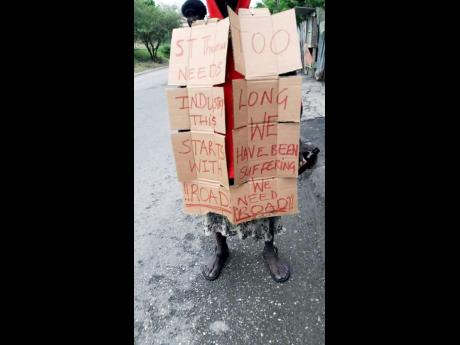 Many persons were armed with placards. 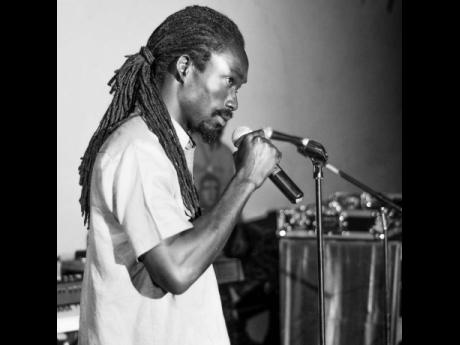 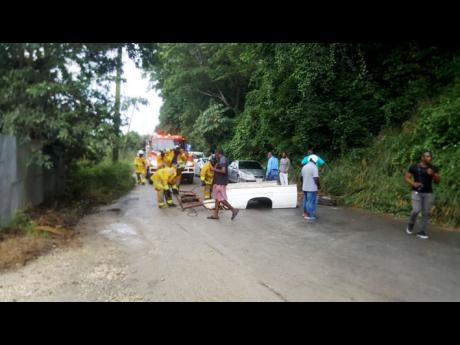 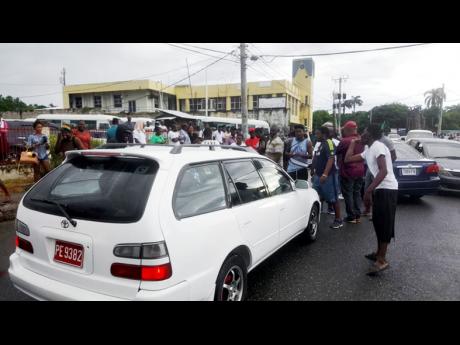 Everything was at a standstill yesterday as St Thomas residents protested.
1
2
3
4

Omar Ryan, the organiser of yesterday's mass protest in St Thomas, is now in police custody.

It is reported that Ryan was asked to visit the Morant Bay Police Station yesterday evening as the police wanted to talk to him.

When he got there he was allegedly transported to the Constant Spring Police Station where it is said that he was detained upon arrival.

Ryan is being held alongside his colleague, Andrew Turner.

They are allegedly being held for 'suspicion of criminal activity'.

Before being held by the police, the men were part of a massive protest in St Thomas, where hundreds of residents were responding to the call from Ryan to stand up against what they call the unfair treatment of the parish and its poor road conditions.

Making their contribution to the initiative, several bus and taxi operators withdrew services, rebuking their colleagues who tried to undermine their efforts by transporting passengers.

Roads were blocked by old cars, big pieces of metal, severed branches, garbage pans, sheets of zinc, and other debris.

Some areas, especially in the eastern end of the parish, were blocked with only a few metre-long intervals between, and debris were replaced each time they were cleared by security officials.

"The persons that were arrested by police have been released, as well as two police vehicles were damaged by residents that were irate, but it was minor damage, nothing major," Ryan told THE STAR yesterday before being taken into custody.

But at least one of the residents who were inconvenienced by the protest decried the efforts of the people, describing their behaviour as 'backward'.

"I am not in agreement with the blocking of the road because we must behave like we are intelligent people. Why are you blocking the roads?" she asked, noting that the people causing the most damage are those who don't even own a vehicle.

The woman, who told THE STAR that she is a teacher at one of the schools that closed early, said she does not support road blocks because it is a counter-productive method.

"How can you stop your children from going to school and say you are doing something productive? I understand and agree that the parish is in need of better facilities and that the roads are deplorable, but you cannot go about getting change like this," she said.

She also lashed out at the police, as she believes they are reactive and not proactive because they were aware that the protest would take place, yet nothing was put in place to prevent it.

Also decrying the blocking of the roads was the main organiser of the protest, Omar Ryan, who has since called for the abandonment of plans to continue the demonstration for the rest of the week.

"Some people misunderstood the call to protest. We wanted the withdrawal of services in the parish but never agreed to the road blocks. We need a real intervention, but we don't want a ZOSO situation. You cannot be blocking, burning and destroying the same roads that we are asking to be bettered. Your actions will only worsen the condition," he said.

Still, he believes the protest was a success. He noted that he believes the actions of the people have gained the attention they need, and hopes that the authorities will hasten their steps in fixing the roads.

"Though I have called off the protest, I will remain a strong voice until we are satisfied. We, the people of St Thomas, are of the view that if we are given good roads, then we can create and manage opportunities for ourselves because we have valuable natural resources at our disposal."