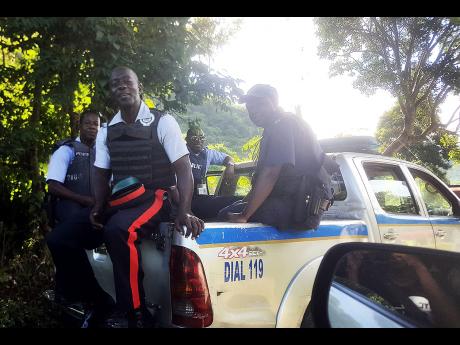 These policemen seem very relaxed as they sit on the back of the van during Duppy Film's funeral. 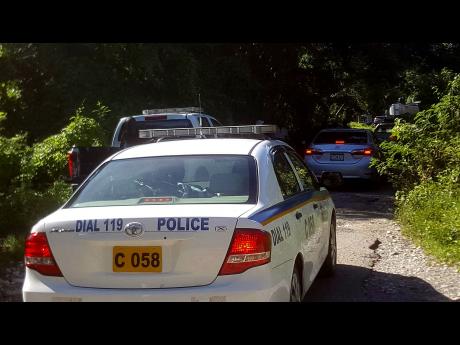 A couple of the many police vehicles that were seen at the funeral. 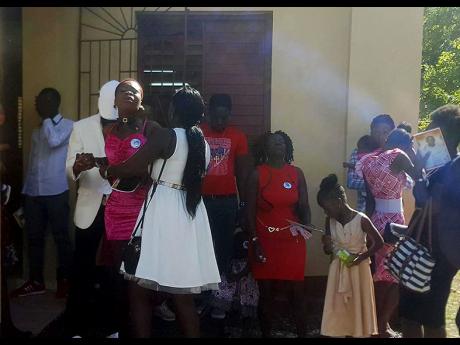 Some of the mourners at Duppy Film's funeral were still struggling to come to terms with his death. 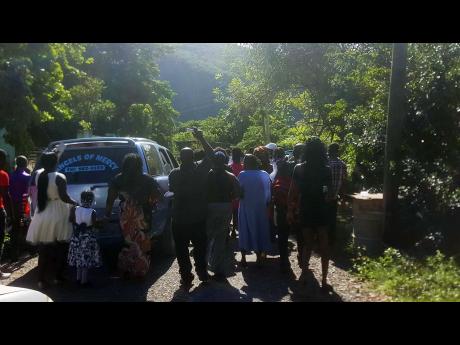 These attendees were seen following the hearse to Duppy Film's final resting place.
1
2
3
4

Soft wails which gradually got louder could be heard coming from the hall of the Lloyds Seventh-day Adventist Church in St Thomas, where the body of Marlon 'Duppy Film' Perry, the man once dubbed Jamaica's most wanted, was being churched.

"From me born till now, a first me see so much police at a funeral. And when we call and report a crime, dem tell you that they don't have no available vehicle to come. Look pon the amount a police car weh a come fi watch dead man," one attendee said to another.

The woman, who likened the proceeding to a 'state funeral', was referring to the many police personnel who could be seen at various posts on and around the church compound, some conducting spot checks of the vehicles travelling through the area.

Though family members and other well-wishers sang at the top of their voices, giving outsiders the impression that the service was well-attended, only a handful of people were seen scantily seated inside the church.

The closed-casket service, which lasted for roughly 35 minutes, was officiated by Linton Hamilton, pastor of the Yallahs District of Churches, Seventh-day Adventists.

He admitted that the service was deliberately shortened based on its nature. He also waved off rumours of him being ordered by the police to keep it brief.

And unlike most preachers at funerals, Hamilton did not flood his message with roses and promises of peacefully resting souls. Instead, he used the opportunity to implore those in attendance to live a life pleasing unto God.

"Sin promises one thing and delivers another. Someone once said that sin is like a king that hires servants and after the servant would have gone out and labour then come his wages," he said.

"Now we understand why the Bible says the wages of sin is death but the gift of God is eternal life through Jesus Christ our Lord. I appeal to you this afternoon, stay far from sin," he warned.

Police vehicles led the way to the Lloyds Public Cemetery, the grounds which were to be Perry's final resting place.

As his body was lowered into the ground and his family members looked on, one woman whose relation to the deceased is unknown shouted: "After years of torment you can finally rest in peace."

She was referring to Perry's years in hiding after he was declared public enemy number one in 2015, when it was alleged that he murdered two police officers.

He was later killed in Port Morant, St Thomas, by the police on September 24.