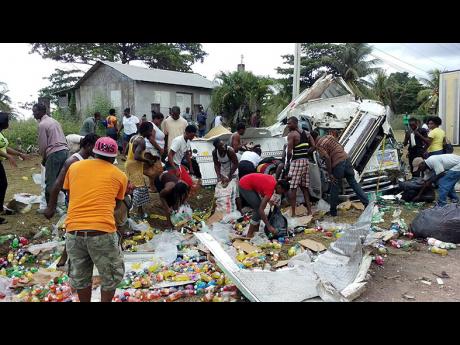 Residents make off with soft drinks after this truck overturned in Portland on Wednesday.

It was a field day for residents living in Orange Bay, Portland, after a truck transporting non- alcoholic beverages from T Geddes Grant overturned.

The incident reportedly took place shortly after 3 p.m. on Wednesday. According to the police, the truck, which ran off the road into a ditch, was severely damaged, dumping loads of Bigga and Busta soft drinks along that roadway in the vicinity of Spring Garden.

The police said that the driver and a sideman, who suffered injuries, were rushed to hospital by residents.

Both men are considered to be in serious but not life threatening condition.

But as news spread about the incident, hundreds of persons from other adjoining communities turned up, and were seen helping themselves to the beverages that were lying around.

Persons were seen placing bottles into boxes, garbage bags, and scandal bags, while others, who were passing by in vehicles, hurriedly rushed out and joined in the grabbing.

According to one woman, it was an early Christmas for them, as Santa had delivered goodies giving them an opportunity to restock shops and bars, which were badly in need of goods.