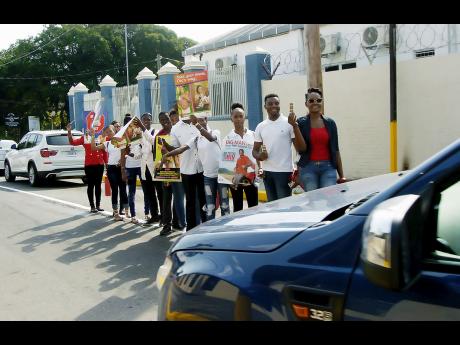 Teachers and students of the Kingston Technical High School took to the streets yesterday to help raise awareness about HIV/AIDS.

Students were heard remixing the songs of Vybz Kartel's 'Mhm Hm' as they chanted "safe sex or no sex."

"Today (yesterday) is World AIDS Day and as a part of out community initiative, we are walking through the community and the teachers are distributing condoms and the students are holding up banners and distributing brochures and we are promoting safe sex or no sex," said science teacher Tenesha Brown

The school's guidance department is responsible for the yearly event. Guidance counsellor Doran Williamson told THE STAR that they had an extensive devotion on Friday where they brought some awareness to the school's population about safe sex and abstinence.

"We went on Sutton Street, we went on East Street ... North Street and we will be going further into downtown Kingston," Brown said.

Teachers were also giving out condoms and educating people on condom use.

Williamson said the school promotes abstinence and used the fourth and fifth form students to help with their awareness campaign.