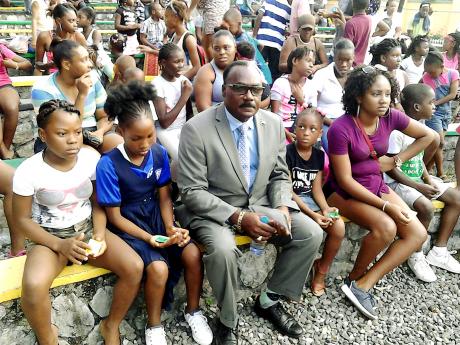 Mayor of Port Antonio, Paul Thompson, sits with a group of children during the Christmas treat on Wednesday.

It was a colourful and carnival-like atmosphere at the Portland Municipal Corporation self-styled amphitheatre and park, as hundreds of children, accompanied by their parents, turned out for a special Christmas treat put on by the Mayor of Port Antonio, Paul Thompson.

The annual treat, which had its inception in the late 1970s, was buzzed with excitement throughout the day on Wednesday, as a mini sound system thrilled the near-capacity crowd with different genres of music, including disco, reggae, soul, rock steady, and dancehall from the '70s, '80s, and the '90s.

The place was also brought alive by the grand entry of Santa Claus, who greeted the kids, while entertaining them with a variety of dancing moves and styles, which, for the most part, were hilarious and comical.

Thompson, who was obviously pleased with the turnout, said the festive season is a time for giving and reaching out to the less fortunate.

"This is my second Christmas treat since assuming the role of chairman of the Portland Municipal Corporation in November 2016," he said.

Thompson added: "It is always a joy to see the happy faces of children, whose parents might be experiencing financial challenges and are unable to purchase toys for them this time around. Along with team members of this municipal corporation, we thank God for the opportunity to host this treat, which provides us with an opportunity to show kindness to the less fortunate."