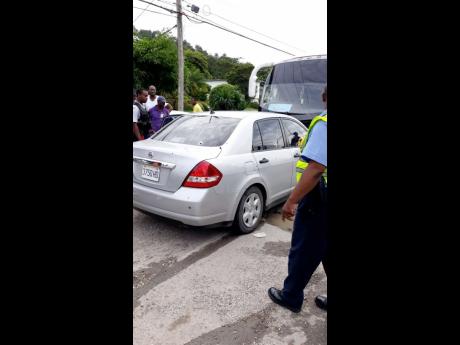 One of the cars that was shot up near the Sangster International Airport in Montego Bay on Tuesday.

The St James police were kept busy yesterday evening as two shootings occurred less than two hours apart, both within the vicinity of the roundabout near the Sangster International Airport in Montego Bay, leaving one man dead and two others wounded.

In the first incident, which took place sometime after 4:30 p.m., gunmen with high-powered weapons opened fire on a Cash Pot shop and four motor vehicles along Sunset Boulevard, near the airport.

Clarke was shot and killed in that incident. Another man, who was shot and injured, was subsequently rushed to hospital. The police recovered approximately 70 spent shells at the scene.

Then, at about 6:20 p.m., while the police were busy processing the scene of that shooting, shots were heard near the airport roundabout again. This time at the foot of Queen's Drive.

It was subsequently discovered that a taxi operator had been shot and injured. He was rushed to the hospital by the police. His condition is not known at this time.

While no motive has been established for either of the shootings, unconfirmed reports suggest that the second shooting was done in reprisal for the earlier shooting of Clarke and the second man.