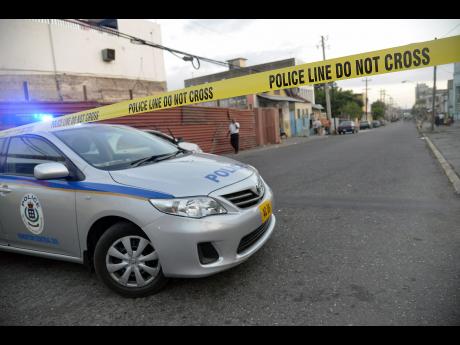 Police vehicle on a crime scene.

Rural St Catherine resident Omar Newton was deaf and mute since birth, but his disabilities didn't prevent him from living a normal life.

Not only was he friendly, but he was the life of any party, and he did everything boys would do growing up, including playing football and going to the river.

But his life was cut short on January 13 when he was shot in the head by gunmen at a bar in Top Hill simply because he 'disobeyed' a command to lie on the floor when a robbery was taking place. The 35-year-old could not hear the command to get flat because of his disability.

He died about six weeks later at the University Hospital of the West Indies (UHWI).

"It's a cruel act. He simply couldn't hear, and I am guessing everyone else in the bar had panicked, and were shocked by what was happening that they couldn't even say that he couldn't hear. He was shot through the back of the head and the bullet exited through his right eye," she said.

Shock was also expressed by his cousin, former Irie FM journalist Horace Mills, who described his relative as a warm and friendly being.

"You could even send him shopping without having to write down the items you wanted him to purchase. We understood him very well and he understood us. He lived a full life despite his disabilities. His death has shaken the community to its core," he said.

Another man was also shot and injured during the attack. The gunmen took several items, including cell phones and cash during the robbery that unfolded in the Cock Crow area of Top Hill, located near Lluidas Vale in St Catherine.

It is said that Newton, along with other youngsters, were at a wake in the usually peaceful community when the criminals struck.

Brailsford said that persons at the crime scene initially thought Newton was dead, but minutes later he showed signs of life and was rushed to the Linstead Hospital and later transferred to UHWI where he remained in a coma until his death.

"I got the call late in the night that he got shot, and when I got to the bar, I saw him lying down on his face. The other person was already taken to the Linstead Hospital. The police were on the scene and they had already pronounced him dead and drew a yellow line around him. I was determined to see if he was indeed dead, so I forced pass the yellow line and to him, and it was then I saw him move his waist," she said.

Newton's grandmother, Alethia Gillepsie, who has been his main caregiver since he was born said she never once thought that her first grandchild would have died in such an horrible manner.

"He was born prematurely, and as soon as him born I took him, and he spent four months in an incubator. He couldn't talk or hear, but he was a happy child. He grew up and became a farmer. I am broken down so bad. All I can do is ask God for strength," she said.