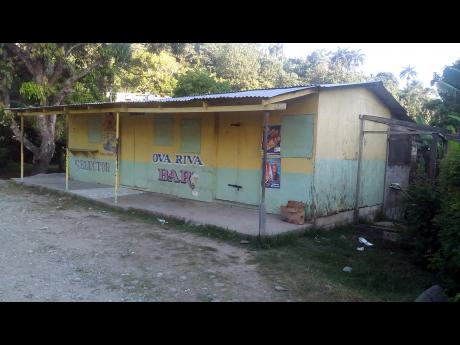 Gareth Davis Sr photo The bar at Seaview Farm Road in Port Antonio, Portland, where the retired policeman was stabbed to death.

The Portland police yesterday captured a man who was on the run following the stabbing death of a retired member of the Jamaica Constabulary Force (JCF).

Ajardo Lawrence, 32, otherwise known as 'Gaza', was apprehended near the bus park in Port Antonio, eight hours after allegedly stabbing 66-year-old retired corporal Homer Davis multiple times with a knife at a bar at Seaview Farm Road, in Port Antonio.

Davis, who served approximately 35 years in the Portland Police Division, was reportedly stabbed all over his body after he went to defend a female who was being physically harassed.

A police report is suggesting that Davis and a female companion were in his vehicle in front of a bar when Lawrence, the woman's ex-boyfriend, called her out.

The woman reportedly got out of the car and an argument started between her and Lawrence inside the bar.

It is further reported that Davis, upon hearing the commotion, intervened, and Lawrence cut and stabbed him several times in the head and upper body.

He was rushed to the Port Antonio Hospital, where he was pronounced dead about 12:30 a.m., yesterday.

"The untimely passing of Davis has left a wave of sadness on members of the JCF in this police division," said Throyville Haughton, inspector of police in Port Antonio.

He added: "Davis was also well loved and admired by residents, along with the business community. It is really a sad period for us all, and the years of service put in by the deceased will be long remembered."

Lawrence is expected to be charged on the weekend with the stabbing death of the retired policeman.