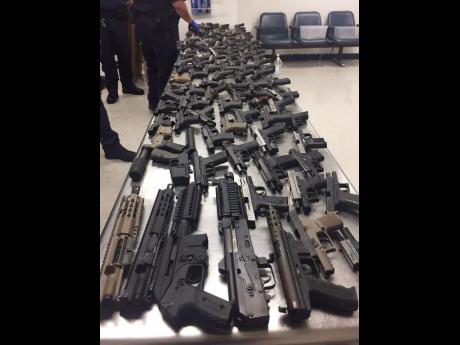 Security experts attending the five-day conference of the Association of Caribbean Commissioners of Police, held at the Montego Bay Convention Centre in Rose Hall, St James, have shared ideas about stemming gun violence in the Caribbean.

The presentations and recommendations were made during a panel discussion, which included Deputy Commissioner of Police Selvin Hay and Port Director, Miami International Airport, US Customs and Border Protection, Christopher Maston.

Hay said there was a consensus among the member states that information exchange and co-operation on initiatives, including the marking and tracing of weapons and the identification of criminal transit routes, were necessary.

"In order to reduce gun violence, the points of entry will be a focus to cut off additional weapons from entering. The flow of high-powered weaponry from the United States to the Caribbean intensifies the soaring rates of gun-related violence in the region, so we will be networking to strengthen our borders," Hay said.

"The criminals are working together, so the police in the region will be working together to implement a regional security framework. This will be guided by the principle of shared responsibility to intensify our efforts to combat the illegal trafficking of weapons, which should result in reducing the gun flow and violence at the community level," he added.

He recommended that the authorities commit more resources at the border to strengthen the security of obvious entry points.