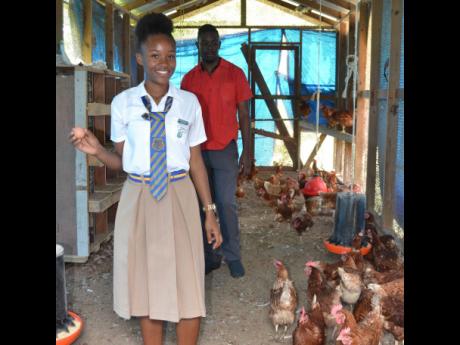 Alexia Lewis, 17, of Glengoffe High School, shows off one of the eggs collected from her school's new chicken coop with agriculture teacher, Donovan Pryce looks on.

The agricultural science programme at Glengoffe High School in St Catherine has received a major boost.

The institution got a chicken coop, 100 layer hens, 100 broiler chickens, farm tools and equipment, a slaughterhouse, a freezer for storage, and a tiller. The project was officially dedicated in a ceremony on April 23.

Principal Kerry-Ann Harper Edwards said that just under half of the student population of 460 cannot afford the daily cost of meals. She said that the lack of food and proper nutrition hurts the students' ability to focus and do well in school. Some students have skipped classes as a result.

"This project means a lot to all of us as students," said 17-year-old Glengoffe student Alexia Lewis. "When we heard that we were going to get a slaughterhouse and a chicken coop, we were so happy and grateful. The old coop could not accommodate several students at a time. With this new one, we have a lot of space. We can all hear the lesson and do the practical work at the same time."

Students in grades seven and eight are able to "practise different production technologies and understand how to process meats in a food-safe environment", said Othneil Carby, projects officer at Food For The Poor Jamaica's agriculture department.