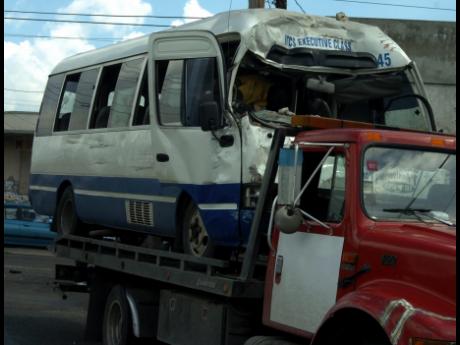 In this 2007 file photo, a wrecker transports a Coaster bus that crashed on Torrington Bridge in Kingston.

A bus conductor who is at the centre of a major crash in Portland on Sunday morning, which left 15 people hospitalised, was reportedly driving without a licence.

Police sources have revealed that the man, who was transporting passengers from Port Antonio to Ocho Rios, was operating without a valid driver's licence. He was never assigned to drive the vehicle by its owner.

The name of the conductor has not yet been released by the police, however, the lawmen have revealed that he is still a patient at hospital and is expected to be questioned and then charged.

Yesterday, Rosalie Edwards, a passenger on the ill-fated bus, said that it was an act of God which saved passengers. She was travelling with her daughter to Ocho Rios.

"After leaving the bridge at Spring Gardens, upon entering that stretch of the North Coast Highway, the vehicle picked up speed. Shortly after, it swerved sharply to the right, ran along the grass at the edge of the roadway, barely missed hitting an almond tree in its path. I remembered hearing people shouting and screaming, when the bus suddenly swerved. It hit an embankment, flipped over probably three or four times before coming to a standstill on its top, "she added.

Edwards, who cried while relating the horrific ordeal, recounted that when the bus slammed into a tree root in a nearby ravine, the screams got even louder.

"It was pure confusion as people were climbing on top of each other trying to get out of the bus, and there was blood all over. Residents in the area rushed to assists us, but the driver was pinned down, along with my daughter, who was seated at the front," she said. "Firefighters came and managed to cut through the vehicle, which was literally crushed, and people who appeared to have broken bones were removed from the wreckage."

The injured were rushed to the Annotto Bay Hospital.

The police consider the stretch of roadway at Spring Gardens leading into Buff Bay a crash hotspot.