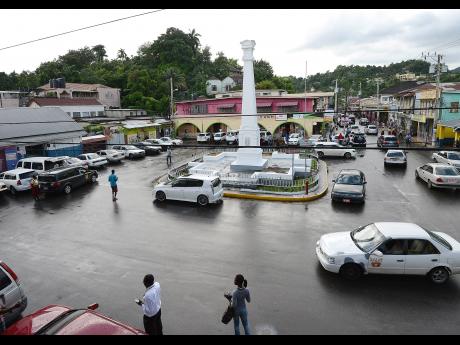 Motorists and pedestrians on the streets of Port Antonio in Portland.

Port Antonio witnessed two crashes in the space of about 20 minutes on Tuesday.

In the first crash, at least three fruit stalls and several motor vehicles were extensively damaged, when a car got out of control and slammed into a school bus along the busy commercial strip on Williams Street in Port Antonio.

According to a police report, shortly before 6 p.m., a couple was travelling in a Toyota Corolla along Williams Street when it is alleged that they got into an argument.

The driver reportedly lost control of the vehicle, which slammed into the parked Shebian Preparatory school bus, pushing it into a grey Toyota Allion.

A young girl, who is believed to be a student, was rushed to hospital after she was reportedly hit by one of the vehicles.

Several fruit stalls laden with produce such as mangoes, pineapples, bananas, and carrots were destroyed.

But less than 20 minutes later, the other motor vehicle accident happened down by West Street.

A car exiting a parking lot, reportedly ran straight across the busy thoroughfare and slammed into three parked taxis.

No one was injured in the second incident. The Portland police are investigating