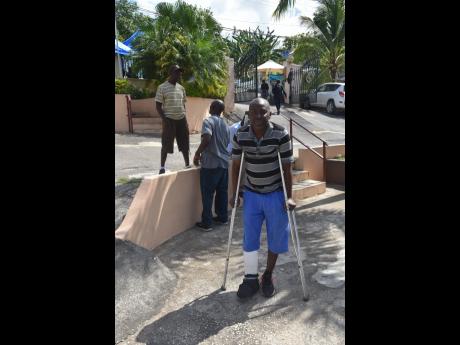 Allan Lewin after he broke his foot playing football.

Popular Montego Bay media personality Allan Lewin has been hospitalised in serious but stable condition, after he was attacked by three females, who inflicted stab wounds all over his body last Friday.

According to Lewin, he received a call from a woman he is familiar with, who asked him to meet her in the vicinity of the St James Parish Court.

He said the woman accused him of kidnapping her sister and having her at his house.

"I told her that I don't know her sister but she say is lie because her sister called her on my phone and say she is at Allan house," he said. "When she show me the number I told her is not my phone, but before I could say anything else two other women come from nowhere and start stab me up."

Lewin said he ran, crying out for help. He said he fell twice but was able to escape.

Lewin, who received several stab wounds to the head, side, back, and on his right hand, said he was taken to the Cornwall Regional Hospital and later transferred to another health facility.

"It must be a next Allan because I don't know what they are talking about," Lewin said. "... but I will be giving my statement to the police as soon as I am discharged ... just glad mi alive."

It has been a challenging period over the past six months for Lewin. He had just recovered from fracturing his foot during a football game, at the same time that he was seeking public help to raise US$3,000 (J$381,720) to acquire new equipment to continue his trade.