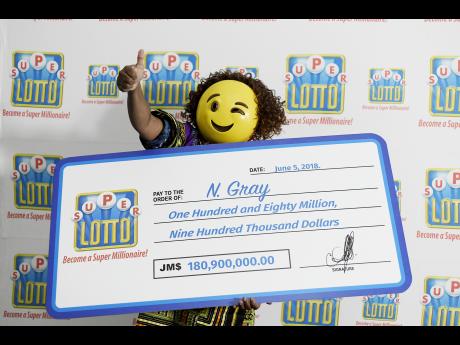 N. Gray, winner of the Super Lotto jackpot, holds a symbolic cheque of her winnings.

Dressed in loose-fitting clothing and a smiling emoji mask on her face, N. Gray yesterday collected her cheque, valued at $180,900,000, from Supreme Ventures after winning the Super Lotto draw.

Her disguise, once again, brought into sharp focus the harsh reality that many Jamaicans are scared to have their images broadcast after getting large sums of money because crime is rampant in the country.

Simone Clarke-Cooper, assistant vice-president of Group Corporate Communications at Supreme Ventures Limited, noted that since Super Lotto started, winners have been wearing disguises to protect themselves.

"Unfortunately, Jamaica is not like other markets. In other markets, they don't necessarily do it, but here I think they opt to do it to keep themselves safe. We are not going to tell them not to do that because their safety is of paramount importance to us as well," she said.

However, he was quick to note that the company does not insist that winners wear disguises.

"People have been coming with their own disguises. They usually don't need our help, and they are usually very creative, perhaps beyond anything that we could think of or imagine, and it has been very effective over the years," she told THE STAR.

Meanwhile, Fitz Jackson, Opposition spokesman on National Security, while noting that it is unfortunate that crime has forced winners of the jackpots to hide their identity from the public, said that he can understand the reservations that persons have.

"Not only [to protect themselves from] criminal, but people inundate them to share the benefit," Jackson said.

While persons who grow up in wealth flaunt their identities without fear, Jackson said: "People who suddenly get these tens of millions of dollars, it is new to them, and they are afraid that they may be targeted."