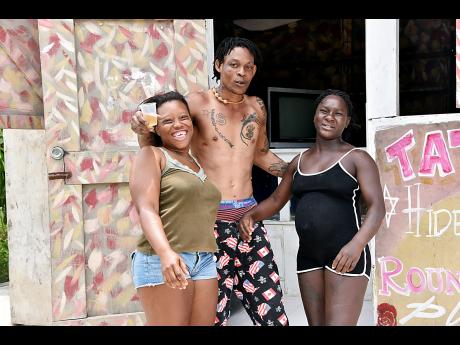 Esroy 'Tattoo' Parkinis and his women, Anna-Kay Parnell, (right), 25, and Melisa Brown, 30. He was recently admitted to hospital with low blood count.

At age 32, Esroy 'Tattoo' Parkins is living the life that many men can only dream of. He has three full-time women, two of whom live with him, and by all accounts, the relationship is an harmonious one.

For Parkins, who lives in the community of Friendship, which is located on the outskirts of the Retirement Dump, the only problem is getting Anna-Kay Parnell, 25, and Melisa Brown, 30, to walk down the aisle with him in marriage.

"A two gal me one live with, one pregnant and the other one supposed to be pregnant now too," Tattoo told WESTERN STAR. "I told them (Anna-Kay and Melisa) that I want to marry the two of them and them telling me no, it can't be done.

"The people in the community look up to me, they call me star boy," Tattoo told the WESTERN STAR team, before revealing that there is yet a third female.

Under Jamaican laws, a person can only marry one individual. It is also a crime to marry another person while still legally married.

"These two girls are not the only ones. While they live in my house, I have another woman who comes by at times and we all sleep in the same house," he said.

"Me and Anna-Kay, who is Tattoo's babymother, has been living very happily together ... We take turns to cook, wash and clean the house and take care of his son."

The three lovers live in a two-bedroom board house, along with the child. Anna-Kay said there is no problem between both females.

"We all live here together, I am his babymother, she is the new girlfriend," Anna-Kay said.

"There is no form a jealousy between us, even though I was there first," Anna-Kay told WESTERN STAR.

Tattoo, who is a tattoo artist by profession, has depended on the Retirement Dump to provide a steady source of income for him and his family for more than 20 years. Together, their livelihood comes from the sale of assorted bottles, copper, boards, steel, and other construction materials.