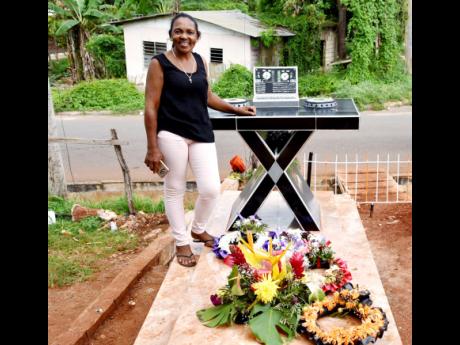 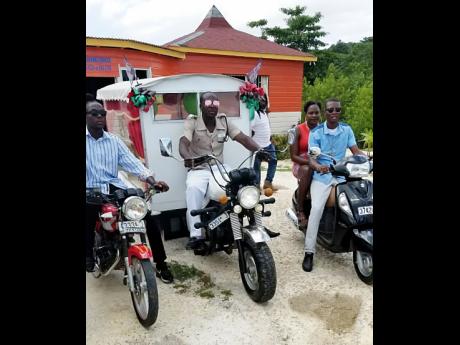 Bike enthusiasts like Force Ripe are taken on their final journey in a motorcycle driven hearse. 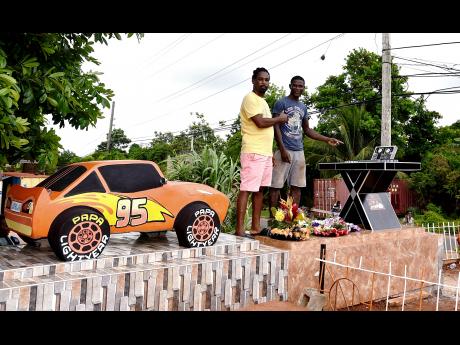 A musical console marks the final resting place of popular sound system selector DJ Force Ripe, who died in a traffic crash in May.

The 33-year-old selector and businessman, whose given name was Ryan Robinson, died in a motorbike accident in Negril near his Whitehall home after two speeding motorcycles crashed head-on along the Nampriel Road in the tourist resort.

The stylish grave, which is made of concrete and tile and fitted with audio cables, went viral and has brought a lot of attention to the community and family.

"His console grave pictures are on Facebook and everybody is excited about the design," Robinson's mother, Ann-Marie Nicolle, said.

When the WESTERN STAR visited the family home last Wednesday, Nicolle said that the grave was just one part of the colourful send-off which western Jamaica's number one DJ got.

"When he died in the bike accident, the family and his friends decided to give him a proper send-off. We did it in style by erecting his music console on top of his grave to indicate his love, passion and lifetime career," Nicolle said.

Godfrey Fletcher, the man who conceptualised the grave, said the idea came to him while sitting at one of the many spots where he used to hang out with Force Ripe.

"I was just holding a meditation at a spot where we hang out regularly. Immediately, I call one of my tilers who I manage, and I shared the idea with him that I wanted to send home Force Ripe with his musical equipment on top of his grave," Fletcher said. "I then took a picture of his music console, showed it to the tiler, and he said, 'This is nothing. This is easy for me to do'.

"I don't know what it's like to be dead, but if Force Ripe could realise what we have done with his final resting place, I know he would be very pleased right now," Fletcher said.

For the designer, Winston Cassanova, the task of making the stylish grave was a no-brainer.

"From the moment my boss told me what he wanted to do, I told him it was good; it can be done. It took me about a week to design it," Casanova said.

Force Ripe's son, Jovan, who predeceased him, has a car marking his final resting spot. That grave was also built by Cassanova.

"He died when he was only nine years old, but he loved cars, and his father decided to design and place a motor car on top of his grave, indicating his passion," Casanova said.

He said that Force Ripe's love for motorbikes caused a split among fans as to what was the ideal image.

"Nuff people wanted a bike, nuff wanted car, but together, we have decided the right image that will reflect his life's

journey, so we built a music console. This is what makes him known all over the country," he said.

Force Ripe's remains were transported in a carriage drawn by motorcycles.

"The demand for the use of our bike hearse is very high. It's a popular service, mainly used by bikers," Michalia Arthurs of Arthurs and Payne's Funeral Services told WESTERN STAR. "Other persons are also requesting it instead of the regular hearse."