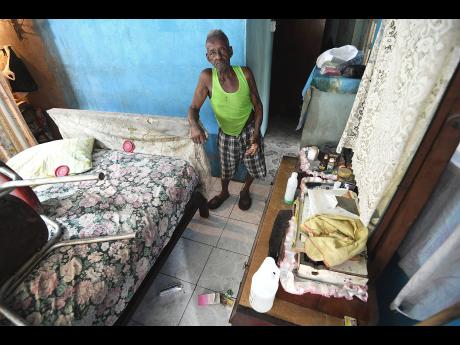 Milford Mills stands in his bedroom, where he says he was attacked by an evil spirit that threw his belongings all over the room on Sunday.

An elderly couple in Drewsland, St Andrew, said they are being harassed and haunted by the 'unseen' after they were hit by stones and household items thrown by 'invisible hands'.

"I was in my room and I had some things on my microwave and I just see the dem fly off. I took them up back and pack them up but as me turn and a go in the next room, me hear the same tings dem drop off again," she said.

But the 'ghosts' had more spooky plans for the family.

"The next day everything start fling from my chest of drawers and tings just start throw from all over the room. Everything up in the air, all me medication and me blood pressure machine deh all over the place and tings just start 'lick' me inna me back and all over mi body. Me and me husband stand up in our room and all things from the kitchen a sail come in come lick we," she said.

Mills said she and her husband sought refuge on their verandah but shoes and other items continued to 'fly' out of the house and hit them as they stood in shock.

Her husband Milford said that he witnessed stones being thrown into the house and on the roof, but stated that he could not see the culprits.

"As soon as me rebuke the 'spirit' and stepped out the room, it start act up back again and start sail tings," he said.

The 86-year old said he has no intention of leaving the house that he built from scratch in 1972.

"I know dem spirits deh can't trouble me, enuh, because me is one of God's bad man, so me a go continue rebuke them. The rest a people dem in the house no have the spiritual power to fight dem, but me nah stop until me house get calm back," he said.

He, however, stated that he has been harassed by persons in the community, some of whom he stated were 'red eyed' because he built one of the first concrete structures within the area.

Although he strongly denies that he is involved in obeah, at least one community member is saying the opposite, calling Mills "a wicked man".

She claims Mills is being haunted by the ghost of a woman with whom he had a previous relationship.

The community member claims persons have seen a woman's ghost walking around the Mills' yard.

"A woman who did rent dem house did get a spiritual person to cast her out and the duppy tell the woman say: 'What don't concern her she should leave it alone'," she said.